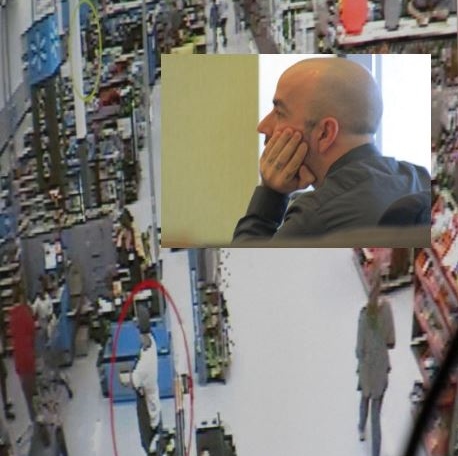 Surveillance video shows the suspect in the case at bottom left, circled in red, while the girls, unseen, are playing hide and seek in a bin circled in green the top left; inset defendant Christopher Dastrup. (Rochester Voice photos)

DOVER - The trial of a Maine man accused of exposing and touching himself in front of two young girls at the Somersworth Walmart in 2017 wrapped up on Friday with the defendant's lawyer citing inconsistencies in the early descriptions of the suspect in the days immediately following the alleged incident.

Christopher T. Dastrup, 34, of South Berwick, Maine, faces up to 60 years in prison if convicted on all four counts of indecent exposure/lewdness: two for exposing himself and two for touching his genitals in front of the girls, who were age 11 and 5 at the time of the incident.

One Sept. 29, the day after the complaint was filed, Somersworth Police Det. Sgt. John Sunderland said he went to Walmart to talk to store officials and get access to store surveillance video, which was provided within a couple of days.

Investigators, given a brief description of where the incident occurred and what the suspect was wearing, pored over the tape and found that the man initially singled out in the video was not the suspect but that the man who walked out behind him could be as they were wearing similar clothing: a T-shirt, shorts and a hat.

Sunderland said they then went back through the videos provided and followed the other man's movements.

"We saw something very serious in the men's clothing section," he told the court.

However, during cross-examination defense attorney Sean Wiberg noted that early descriptions of the suspect had varying colors on both the hat, the shorts and the T-shirt the suspect had been described as wearing.

"We have a gray hat, a white hat, we have a plaid shirt,"Wiberg quipped.

He also said the older girl's father had described him as wearing blue shorts and a white shirt but later changed it to white shorts and a blue shirt with stripes.

He also queried Sunderland why he told FBI agents the suspect had tattoos when the original descriptions of the suspect never mentioned tattoos.

"Cause if you didn't put tattoos in they wouldn't get (who you thought) was the suspect," Wiberg said.

Sunderland replied that after watching surveillance video of the suspect's behavior in the men's clothing section, Dastrup, who has tattoos, was identified. He said he then forwarded about 220 minutes of raw surveillance tape to FBI experts who distilled it down to a single 20-minute tape that followed both the girls and Dastrup during their time at the store.

In the video shown to the jury the suspect is circled in red while the girls' position is circled in green. As the 20-minute video played for the jury, the defendant and lawyers, silence in the court was deafening.

As Wiberg continued his cross-examination of Sunderlandd, he asked the 10-year veteran of the Somersworth Police Department about his comment he had seen something very "serious in the men's clothing section."

"Did you see a penis?" Wiberg queried.

When Sunderlandd said no, Wiberg asked if he'd seen the girls blurt out something at any point and run to the older girl's father and point out the suspect's alleged behavior.

Again, Sunderlandd said no, but added, "He (the defendant) lifted up his shirt while aiming at the girls."

Sunderlandd also said the man's hand was seen near his crotch.

"He could've had an itch," Wiberg said, adding men touch near their crotches all the time.

After Sunderland's testimony the state rested its case and the jury was dismissed till Monday when closing arguments are scheduled.

It's still not clear whether Dastrup, a registered sex offender in the state of Maine. will testify on his own behalf Monday morning. If he doesn't, closing arguments are set to begin around 11:30 a.m.