State senator doubts Lebanon $ would be mandated for bridge replacement 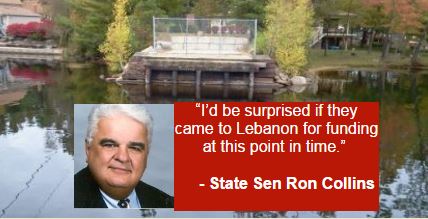 The state senator who represents Lebanon said on Friday he doubted the state of Maine would seek to have the town share in the replacement cost of the New Bridge Road bridge.

"I'd be surprised if they came to Lebanon for funding at this point in time," said Ron Collins, who serves as co-chair of the state's Transportation Committee.

Collins added it was premature to be discussing any potential money that might be required as there's no current price tag on replacing the span, which connects Townhouse Road in Milton and New Bridge Road in Lebanon.

"There's not even a price tag on the bridge," Collins added. "Since we don't know the amount of money to replace the bridge, it's too early to say what might be required from a town like Lebanon; there might be nothing required."

A Maine Department of Transportation engineer said on Friday that no money has been committed to the replacement of the bridge and that the project will have to compete with other state construction projects for funding.

Jim Foster, a Maine DOT Bridge Management engineer, said he met with his counterpart in New Hampshire, Nancy Mayville, but never said Maine had committed any money or to a particular timetable.

"That bridge has to compete with other bridges that we have and that process has not happened yet," said Foster last week, adding that work plans for fiscal year 2019-2020 "have not been finalized."

At a Board of Selectmen's meeting on Aug. 15, Foster noted that if the town wanted to move toward replacing the bridge during that fiscal year, they would have to make "a commitment" by October or November, according to meeting minutes posted online.

However, Mayville said a week ago that the bridge project was moving forward with replacement set for FY 2019-20, which would mean sometime between July 1, 2019, and June 30, 2020.

When the Garage Way bridge was replaced about 10 years ago, there was no funding by Lebanon, Foster confirmed, but when pressed on why that would change, he refused comment, instead directing further inquiries to the department's public affairs office.

When asked if there was a money component to the town's "competing" for state funding, he declined comment again, saying only, "Those things are being discussed."

The funding mechanism for bridges between Lebanon, Maine, and Milton, N.H., have historically been that Maine pays half, with New Hampshire's half being shared between Milton (20 percent) and New Hampshire (80 percent).

Lebanon selectmen were not immediately available for comment. At their Aug. 15 meeting they discussed raising money by possibly applying for grants, putting it on a town ballot or starting a capital improvement account.

When the bridge was first taken down eight years ago, former Maine engineer Chip Getchell hinted that Lebanon money might be necessary to expedite the project.

A year ago, the cost of the replacement bridge had been estimated at around $1.4 million.