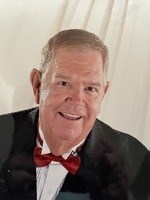 PORT CHARLOTTE, Fla. - Stuart Jeffrey McAlpine, 72, of Port Charlotte, and formerly of New Hampshire and Scotland, died on May 29, 2021 in Port Charlotte. He was born on October 1, 1948 in Dover, N.H., to parents George and Edna McAlpine. He spent his career as an entrepreneur in world trade.

Stuart was a member of the Masonic Lodge for 50 years, following a long family tradition...father, uncles, son, and nephews. He a member of the York Rite, Scottish Rite, Bektash Shrine, and the Eastern Star. Stuart was an avid hunter, fisherman, and loved to golf.
He is survived by his wife, Shirley Curtis McAlpine of 53 years; one daughter, Tonya (Michael) Ramos; one son, Jeffrey (Jessica) McAlpine; six grandchildren, Elizabeth, Stephanie, Brian, Tyler, Michael, Amber; six great-grandchildren and two more on the way; and three sisters, Jennifer, Kimberly, and Vanessa.
He was preceded in death by his parents, George and Edna McAlpine.