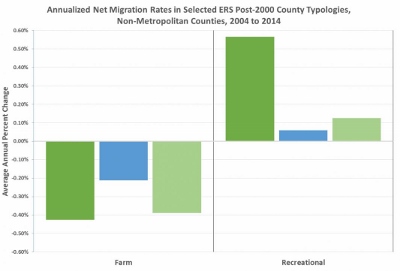 DURHAM, N.H. - The economic shocks of the housing market crisis and Great Recession were associated with striking changes in net migration patterns in both rural and urban America, with rural farming communities experiencing different migration trends than other rural areas, according to new research funded by the NH Agricultural Experiment Station at the University of New Hampshire.

Ken Johnson, a demographer and professor of sociology at the University of New Hampshire, and colleagues from the University of Wisconsin, found:
As the economic situation deteriorated, fewer Americans migrated.
Counties with histories of net migration losses or minimal migration gains prior to the recession had smaller losses or actually gained migrants during the recession.
In contrast, counties with histories of significant migration gain prior to the recession experienced smaller net gains, or lost migrants during the recession.
"Overall migration rates slowed to record lows during the Great Recession," said Johnson, who also is a senior demographer at the UNH Carsey School of Public Policy. "We suspect that the recession 'froze people in place' with houses they couldn't sell, retirement plans that lost value, and a precarious labor market that offered little incentive to relocate."
Just before the Great Recession, migration patterns across the nation were consistent with those of the past several decades. Net migration gains were greatest in large areas of the West and Southeast, in suburban counties of many large metropolitan areas, and the recreational areas of New England, the Upper Great Lakes and the Mountain West. In contrast, migration losses were greatest in rural areas of the Great Plains and the Corn Belt, in much of the industrial belt of the Great Lakes and East, as well as in the Mississippi Delta and the urban cores of large metropolitan areas in the East and Midwest.
Most counties with migration losses prior to the recession actually showed migration gains during and after the recession. The patterns are most distinct in the Northern Great Plains, where the impact of the energy boom on migration in the Dakotas is clearly reflected. In areas that gained migrants prior to the recession, migration losses during the recession also are clear. Migration losses were evident in most traditionally fast-growing areas in the West and South.
Researchers also found different types of rural areas, specifically traditional rural farming areas and rural recreational areas, experienced different migration trends. Traditional rural farming communities have an economic base and employment structure heavily dependent on agriculture and rural recreational areas are based on natural and built amenities, services and recreation.
Rural farm communities have a long history of out-migration, particularly among young adults. During the pre-recession, the average annual loss among farm counties studied was substantial. However, this migration loss diminished during the recession before increasing again after the recession.
In contrast, recreational counties have been among the fastest growing rural counties in each of the last four decades. Migration has fueled almost all of this growth as reflected in a substantial migration gain just before the recession. However, with the onset of the Great Recession, net migration to the recreational counties sharply diminished, with only a modest recovery in the post-recession period.
"The contrast between these county groups illustrates how the recession disrupted traditional net migration patterns in rural America just as it did in urban America," Johnson said. "And while the recession may be waning, its demographic impacts continue to be felt in both rural and urban areas."
Read more from:
lifestyle
Tags:
None
Share: