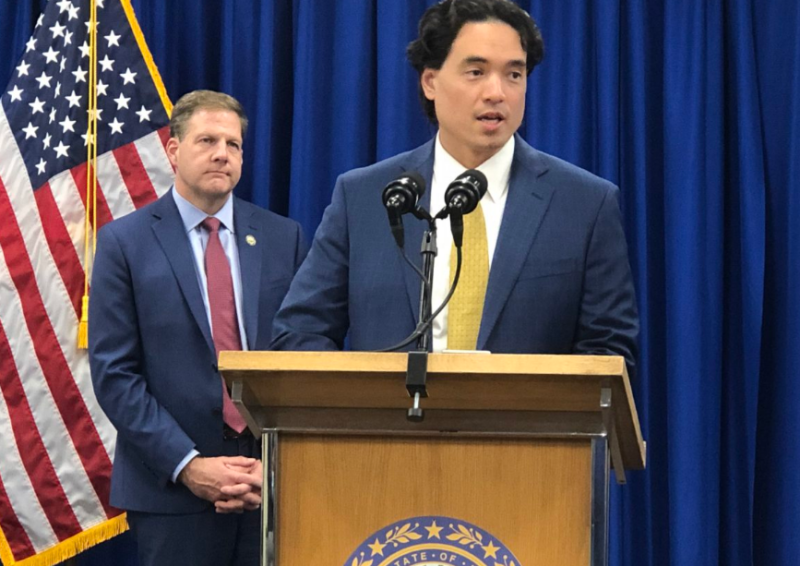 Dr. Ben Chan is pictured at Thursday's news conference in Concord with Gov. Chris Sununu behind him. (Paula Tracy photo)

CONCORD - Gov. Chris Sununu announced shortening COVID-19 quarantine time, criticized House Republican leaders for lack of transparency related to exposure to the virus Nov. 20, and outlined how the state will prioritize the first shipments of vaccine when they arrive in a matter of days.

Speaking at a news conference on Thursday afternoon, Sununu, a Republican, chastised the GOP caucus for the lack of information provided to the rest of the House, its staff, and others about Nov. 20 in which the House Republican caucus gathered inside the ski lodge at McIntyre Ski Area in Manchester.

Sununu said at least four of the attendees tested positive for COVID-19 but that it appears there was little notification to the Democrats in advance of "Organization Day" held Wednesday outdoors at UNH.

Many Democratic House members chose not to attend Organization Day for health reasons after learning last-minute about the GOP exposures.

Democrats contend they had to find out through the media rather than getting notified by the new Republican leadership in the House.

"I think there are four known cases at this point in time, there might be more down the road, yes, of course, they should have reached out but that is really the legislature's role there," Sununu said.

For those believed exposed to COVID-19 who should quarantine, the Centers for Disease Control this week announced changed recommendations that states can safely reduce the number of days needed in quarantine from 14 days to 10. The state will go along with that guidance now, Sununu said.

The CDC also announced that it would recommend that states could allow for a test-out option out after seven days of quarantine, but New Hampshire leaders are not going to go with that, due in part to the potential drain that might have on COVID-19 testing.

Currently, the state has a four- to five-day wait for results of a test, due to an increase in testing surrounding the Thanksgiving holiday, and while it gets through that backlog, it is taking time and testing resources, state officials said.

The change in quarantine rules does not change the state's travel restrictions outside of New England. Those who return from outside the six-state region will still need to quarantine for 14-days, but that guidance does allow for a test-out option after seven days of quarantine.

Locally, current case counts show Rochester at 63, Dover at 51, Somersworth at 34, Barrington at 14, Milton at nine, Farmington at seven and Strafford at eight.

Sununu also talked about plans for COVID-19 vaccine distribution, just weeks away, with priorities given to the most vulnerable and their health-care providers.

Dr. Beth Daly of the state Department of Public Health said about 100,000 need those vaccines first and though the state may receive tens of thousands of doses the first week, and each ensuing week, there will not be enough initially to do them all in the first week.

"It will take many weeks to vaccinate everyone (in the first phase of priority) and will not get to the general population until March or April," Daly said.

Dr. Benjamin Chan, the state epidemiologist, said the state is now at 544 deaths and in the last few days 16 have died, a majority of whom have been in long-term care facilities. He said he continues to hear people compare COVID-19 to influenza but this is 10 times as deadly, he said, noting that each year the state loses about 40 or 50 people to the flu.

Another current outbreak, at the State Veterans Home in Tilton which began Nov. 10 is deadly and getting worse. Sununu said he is working with federal Veterans Affairs officials who have brought people in to help with understanding the outbreak.

The state now has a total of 19 total long-term care facilities in outbreak status.

Hospital capacity is also a concern with 156 patients hospitalized with COVID-19 currently. A few weeks ago, that number was fewer than 100, Chan noted.

Sununu said that capacity is a fluid number and goes back and forth based on the number of elective procedures, the staffing levels at a hospital and other factors and in fact, there was less hospital capacity in October (we were at 75 percent) compared to November when there was 65 percent.

There is hospital surge capacity but it needs to be watched closely as the number of cases rise and there is a few weeks lag time before they materialize in hospitalizations. Hillsborough County is seeing some Massachusetts hospitalizations, he noted, though there is no exact number, and hospitals need to take all comers regardless of where they live.

"If someone comes in for care there is a responsibility to not turn them away," Sununu said.

New Dashboard
The state has updated and expanded its dashboard on COVID-19 at nh.gov/covid19.

There is a lot of data and it is very interactive, Sununu said.

You can view deaths by age, daily trends for new cases, areas that are geographically higher impacted, and how many people in your town have been tested.

There are a couple of new features related to schools that will allow students, parents, and faculty to know in real-time what is going on in their schools. It will include the last reported case in a school, which schools are hybrid, fully remote, and in-person in real-time learning.

Sununu said students are doing a great job and so are their teachers and parents getting through this.

Sununu ended his briefing on a positive note reminding the public to not become weary and let the virus win.

"There is a light at the end of the tunnel. It is getting closer and closer," Sununu said. But he warned the virus does not simply go away Jan. 1 or when the vaccines arrive and that "winter could be a little tough, still."