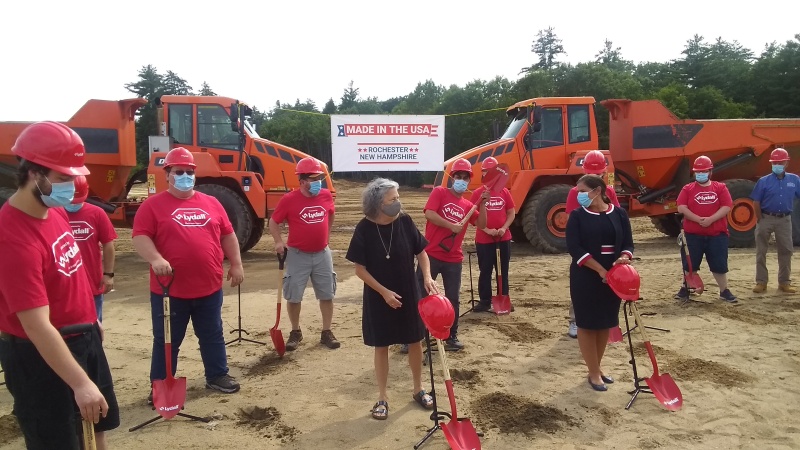 CONCORD - Gov. Chris Sununu on Tuesday called the expansion of Lydall's production capability in the making of filtration media for N95 masks, "a great thing" for the Granite State.

The expansion was celebrated on Friday with a groundbreaking at its Chestnut Hill Road facility. Once construction is finished next May the plant will be the largest maker of filtration media in the United States, enabling the creation of 1.7 billion masks annually.

"There are so many manufactures that have stepped up, and Lydall is second to none," Gov. Sununu said at Tuesday's COVID-19 press conference. "They do an amazing job."

The expansion comes following Lydall's recent signing of a $13.5 million contract with the U.S. Dept. of Defense. The contract will support Lydall's investment in two new meltblown production lines.

When the two new lines are in place, Lydall will increase its capacity of meltblown filtration media to support the monthly domestic production of 140 million N95 respirators or 540 million surgical mask

Interestingly, DHHS Commissioner Lori Shibinette announced a comprehensive study into whether air ventilation systems at long-term care facilities may have contributed to the many outbreaks that have occurred in congregate elderly care housing.

"The state will be undergoing a two-week study to analyze ventilation system to see if we find patterns, in air filtration, where a facility may have sustained an outbreak," Shibinette said.

Shibinette noted that there is no evidence that poor ventilation or filtration systems are being blamed on any deaths at such facilities, which have accounted for more than 80 percent of the state's coronavirus fatalities.

She said they were conducting the study do be proactive, adding, "We don't want to leave any stone unturned."

Gov. Sununu also announced an additional $7 million in CARES ACT money for veterans, veterans programs and nonprofits that support them like the American Legion and VFW.

Organizations wanting to apply for the grants should go to goferr.nh.gov for instructions and rules. The deadline for applications being submitted is Aug. 10.

The governor also announced enhanced funding for student scholarships at the college and secondary level as well as enhanced COVID financial aid for minority-owned businesses.