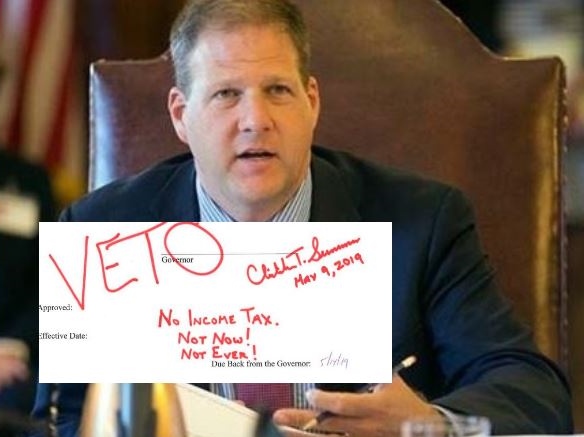 Governor Chris Sununu; inset, his signature on the veto, with some extra emphasis added. (Courtesy photo)

CONCORD - Gov. Chris Sununu vetoed a bill on Thursday that would have established an income tax to help fund the Democratic-led bill to provide paid family and medical leave in New Hampshire.
"Senate Bill 1 is an income tax that neither I nor the people of New Hampshire will ever support," Gov. Sununu said shortly after the veto. "I have proposed a paid family medical leave plan that will work - one that is voluntary, affordable and income tax free. That is the New Hampshire way."
The family leave benefit crafted by Democrats would provide up to 60 percent of gross pay for up to 12 weeks of qualified leave annually for someone who has a child, a nonwork-related injury or many other health or family emergencies.

It would have been funded by a .05 percent universal withholding from individuals' paychecks, something that didn't sit well with Republicans and the governor.

"I applaud Governor Sununu for standing up for New Hampshire taxpayers and vetoing legislation that would have created an income tax," said Senate Republican Leader Chuck Morse, R-Salem. "An income tax in New Hampshire will be the end of the New Hampshire advantage and the beginning of reckless taxation policies."

Sununu appeared on Fox News on Wednesday where he made known his intention to veto the bill when it came to his desk.