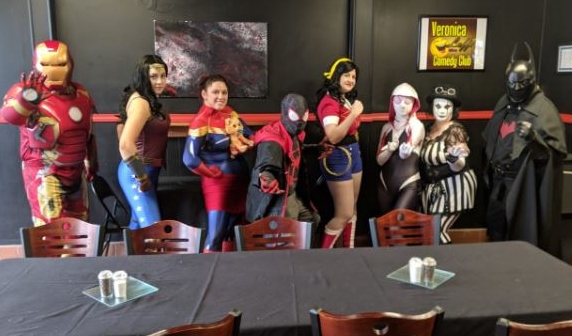 Volunteers dressed up as superheros for the Superhero Breakfast at Curlies Comedy Club on Saturday. (Courtesy/Rochester Main Street)

ROCHESTER - A gaggle of superheros took a break from fighting crime last weekend and sat down for a comic-book themed breakfast and just days later residents put their knowledge about the comic icons to the test at Revolution Taproom and Grill, all leading to today's celebration of the 13th Annual Comic Book Day.

"This is such a fun event, because it brings people of all ages together to enjoy a meal and celebrate their favorite superheroes," said Rochester Main Street Executive Director Angela Mills. "Everyone had a great time this weekend.

The breakfast was the first in a series of three similar events in Rochester this spring. A comic-book themed trivia night was held at Revolution Taproom and Grill on North Main Street on Tuesday, April 30. Eight teams competed against one another answering a variety of questions about superhero lore.