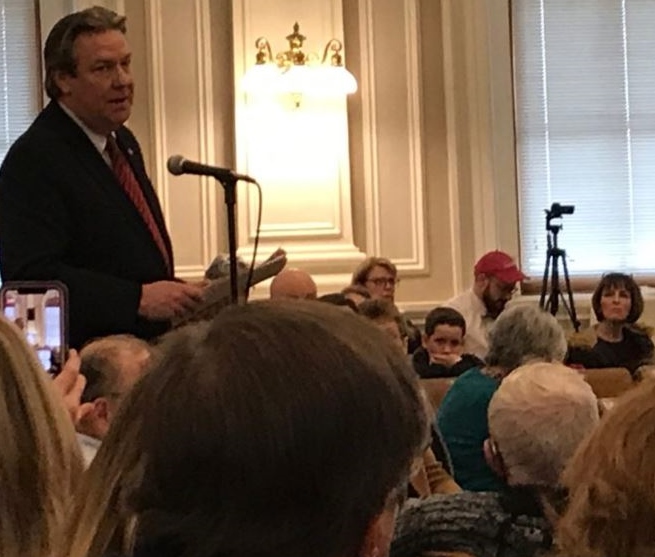 About 200 people turned out to testify on CACR 14 at the hearing before the House Judiciary Committee, almost all in opposition on the 47th anniversary of the U.S. Supreme Court's Roe vs. Wade decision legalizing abortion.

The proposed amendment would "protect citizens from us, the people who hold these seats," said the bill's prime sponsor, Rep. Tim Smith, D-Manchester, speaking in Representatives Hall to accommodate the large crowd.

"There is nothing more emotional, nothing more sensitive, more private or personal," Smith said, "and a legislative body is not qualified to resolve this issue."

But opponents said the rights of a pregnant woman do not override the rights of an unborn child, and maintained the amendment would create abortion on demand and prohibit any regulation of providers or facilities where abortions are performed.

"This is about abortion on demand," Katie Glenn, government affairs counsel for Americans United for Life, told judiciary committee members. "This has nothing to do with well-trained practitioners."

She said similar legislation has been used to tear down government requirements for abortion clinics.

A sponsor of the bill, Rep. Chuck Grassie, D-Rochester, said the amendment was proposed due to changes in Washington that could result in the U.S. Supreme Court overturning Roe Vs. Wade.

Having the amendment in the state constitution would protect a woman's right to make her own decisions, he said.

Grassie said his daughter came home from college and told her parents she was going to be a mother. She eventually decided to have the child, which he helped raise, Grassie said.

"You don't know what someone's situation is," Grassie said. "We don't need politicians and special interest groups imposing their values on others."
But Manchester attorney Ovide Lamontagne said New Hampshire abortion laws are some of the most liberal in the country.

"New Hampshire has chosen not to regulate abortion," he noted, and if Roe vs. Wade is overturned by the federal court, New Hampshire's abortion law would not change.

Lamontagne noted the proposed amendment "creates mischief" that ought to concern both pro-life and pro-choice advocates.

Several speakers noted the amendment could mean a father of an unborn child's permission would be needed before an abortion could be performed, or that state tax dollars could be used to pay for abortion.

Ellen Kolb of Cornerstone Action said the amendment raises issues with existing state law, such as parental involvement. What would happen to that law under CACR 14, she asked, or the prohibition on taxpayer-funded abortions, or on a person's condition of employment.

Several women told of having abortions and are now opposed to the procedure because of the pain it caused, while others urged pregnant women to seek help at 19 agencies in New Hampshire as they opposed to the bill.

She said an unborn child is a human with rights, and a medical decision made on its behalf violates its rights.

Robert Dunn, director of the office of public policy for the Roman Catholic Diocese of Manchester, said the bill "would prevent the state from passing or enforcing laws that would restrict (or even simply inconvenience) abortion at any point during pregnancy..."

Dunn noted many of the same people were sitting in the same room a year ago for the public hearing on a bill to repeal the death penalty which the church supported. Lawmakers last year repealed the death penalty by overriding Gov. Chris Sununu's veto.

"The church supports the inherent dignity of every human being at every stage of life," Dunn said. "It is all interconnected."

Organized pro-choice groups such as Planned Parenthood or NARAL (National Abortion Rights Action League) did not appear to support the proposed amendment.

A proposed constitutional amendment requires a three-fifths majority in the House and the Senate to be placed on the next general election ballot, which would be this November.

A two-thirds majority of voters in the general election needs to approve the amendment to change the constitution.

Garry Rayno may be reached at garry.rayno@yahoo.com