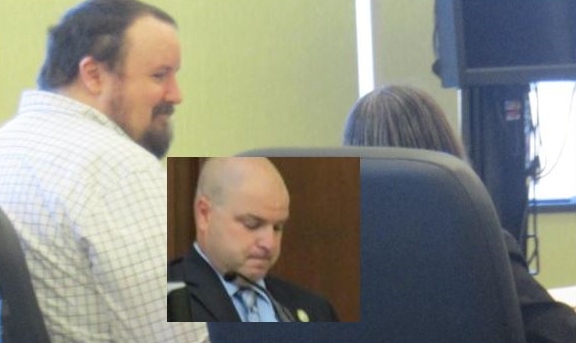 DOVER - The man dubbed "Barney Fife" by some family members of the two women slain in the Farmington murders of 2017 took the stand on Wednesday saying that systemic issues with how evidence is collected, verified, vetted and preserved along with his investigative team being short-staffed led to the bungling of discovery that forced a mistrial in October.

Under questioning from defense lawyer Meredith Lugo, State Police Lt. Brian Strong, the former lead in the case, testified that early on after his investigation began he asked for more help on his Major Crimes Unit team, but was denied due to financial constraints at the state Dept. of Safety.

With hundreds of pages of evidence and scores of media files including surveilled phone calls, extracted cell phone texts and emails and surveillance images, Strong said early on he felt overwhelmed, so he created a spread sheet to try to organize the far-flung players in both the homicide and drug trafficking aspects that permeated the case.

Wednesday was the second day of a Motion to Dismiss hearing seeking to free double-murder suspect Timothy Verrill, 37, of Dover, who is accused in the Jan. 27, 2017, stabbing and bludgeoning deaths of Christine Sullivan, 48, of 979 Meaderboro Road, Farmington, and Jenna Pellegrini, 32, of Barrington. He faces life in prison without parole if found guilty.

Strong said that beside the raft of evidence and persons to be interviewed in Florida, where Sullivan's on again, off again boyfriend and convicted drug dealer Dean Smoronk had a condo; and in New Hampshire, where Sullivan was known to deal drugs as part of his enterprise, he also had trouble with his own investigators who often failed to update him on their progress in the case.

"If they're assigned a task, when they do report it it's saved on their individual computers," Strong said. "If that is not passed forward, it does not come to the lead because there's no single repository for all these reports.

"So I created a spread sheet on who was doing stuff to make sure, so I tried to keep track of all documents coming in."

Strong complained that there was no records management division in the Major Crimes Unit to back check witness interviews and statements as they come in.

Another problem, Strong testified, was that he had no access to his team's computer files.

That's why he created the spread sheet.

"It wasn't perfect, but it was better than what I was given, which was nothing," Strong said. "I tried to write who did what and pass it off."

Under questioning from Lugo, Strong also testified that early on in the case DEA agents handled nearly all of the drug investigation into Smoronk's and Sullivan's drug enterprise, while Strong and his Major Crimes Unit team worked on the homicide investigation.

Sometime later in 2018 or 2019 Strong learned the DEA would not be passing on information from their drug probe.

Lugo pressed Strong on a myriad of discovery blunders regarding witness interviews and statements that she learned of not through discovery but after the October murder trial began.

After a couple of hours of pointed questioning from Lugo, Assistant State Attorney Peter Hinckley briefly cross-examined Strong, mostly to establish there was no intent to deceive or manipulate discovery.

"Was that intentional ... missing all that discovery?" he asked Strong.

"Was it ever you intent to withhold evidence?"

The hearing is expected to conclude with final arguments today, although another day is set aside on Friday if needed.