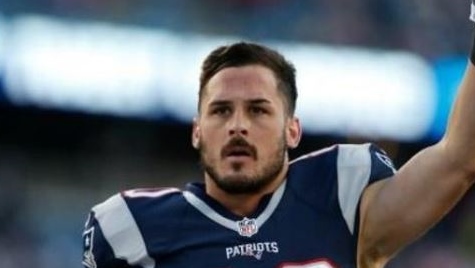 Did you ever notice that Amendola begins with Amen?

In the past two weeks following his miraculous catch to win the AFC championship game against the Jaguars, the Patriots wide receiver has been turned into a bona fide cult hero, nay icon, by a legion of fans.

Yes, it's true, I have a man crush on Danny. I'll shout it from the rooftops, but I defy any Patriots fan not to love this soft-spoken, humble man who also has the will and ability to go for the ball where angels and many other wide receivers fear to tread, like over the middle with a 250-pound linebacker bearing down on you.

With his penchant for picking up his game in the playoffs, the comely Amendola is now flirting with the edge of folklore after a pair of songs recently came out literally "singing his praises."

First there is the song by "Hardy" (Rob Poole) of the Spots Hub 98.5 that parodies "Lola" by the Kinks, one of my favorite bands.

It's a great song with killer lyrics, among them,

"Rob got bumped and Brandon was cooked,

but then Brady said I can always find Amendola, D-O-L-A, dola."

Interspersed seamlessly within the lyrics are the live broadcast comments of CBS sportscaster Jim Nantz and colorman Tony Romo, whom many loath but that's another song yet to be written.

"They were down by three,

they needed to score,

to go up by four,

'Danny can you catch one more for me?'"

Now another song, and this one is off the charts, has been written to the melody of the iconic "Hallelujah" by Leonard Cohen. It's by Ian Cunningham and performed by Ian Biggs with guest vocalists, all of whom are huge Patriots fans.

This song will knock your socks off with beautiful voices singing the praises of the Dola, like,

but we needed you.

We saw you staying on your routes,

But QB Brady almost overthrew ya."

After hearing these two tidbits, if you're still thirsty for more Patriots binging in advance of Sunday's Super Bowl, I suggest two longer tomes, one an NFL Network yearlong retrospective on Coach Bill Belichick from the 2008 season here, and a hot-mic feature of last year's historic comeback against the Falcons in Super Bowl VI here.

I'd watch them all. It's freaking cold out there.