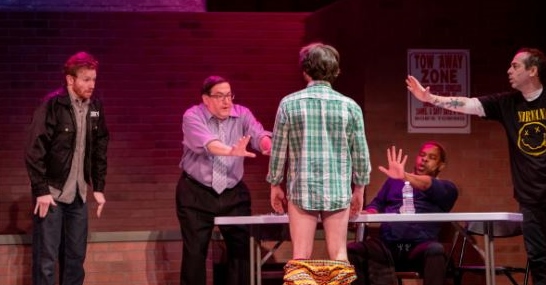 A range of emotions unfold during a tryout for a male strip show in 'The Full Monty', now playing at ROH through Feb. 1 (Courtesy photo/ROH)

ROCHESTER - If the public had its way, the Rochester Opera House production of The Full Monty would continue a Cats-like run through December.

They might not be doing that, but it was announced this week that they are adding two shows to their three-week run, with both a matinee and evening show on Saturday, Feb. 1.

Cats, a musical that opened to rave reviews in London in the '80s, ended up playing almost 20 years on Broadway.

ROH's Full Monty might not make it that long, but director Anthony Ejarque said on Thursday it's been one of their most successful endeavors.

"The show is so much fun," he said. "Folks want us to keep doing it all year."

Theatergoers from all over the Seacoast and Southwest Maine are flocking to see the play that The Rochester Voice called "heartfelt, laugh-out-loud funny and honest." The Portsmouth Herald and Foster's Daily Democrat agreed, saying The Full Monty "checks the fun box."

Based on the cult hit film of the same name, The Full Monty, a ten-time Tony Award nominee, is filled with honest affection, engaging melodies, and the most highly anticipated closing number of any show.

The plot goes like this. While spying on their wives at a "Girls' Night Out," a group of unemployed steelworkers from Buffalo sees how much the girls enjoy watching male strippers. Jealous, out of work and feeling emasculated, the men come up with a bold and unclothed way to make some quick cash. In preparing, they find themselves extremely exposed; not merely physically but emotionally. As they conquer their fears, self-consciousness and prejudices, the men come to discover that they're stronger as a group, and the strength that they find in each other gives them the individual courage to "let it go."

"We've had a successful run so far so we've decided to extend to February 1st in order to give more people a chance to see the show," said Ejarque, who is also the ROH executive director.

ROH restaurant sponsors are offering discounts and specials to ticket buyers before and after the shows, ROH announced this week. Restaurants include 110 Grill, Revolution Taproom, The Governor's Inn, and the Lilac City Grille.

The Full Monty is sponsored by AARP New Hampshire and co-sponsored by The Rochester Voice.