The case of the misunderstood murderess? Oh pahlease! 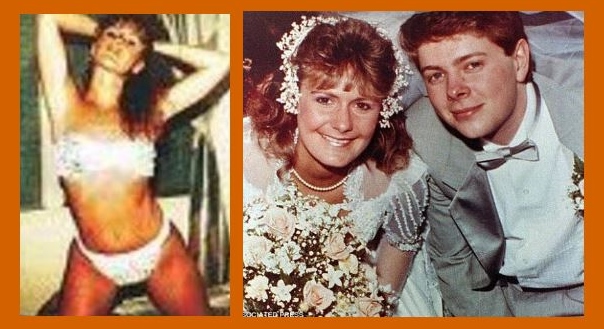 Left, the bikini-clad pik that ignited a firestorm on daytime TV talk shows. Right, Greg and Pam Smart the day of their nuptials. (Courtesy photos)

What can I say?

Whenever we have a slow news day around here, we wheel out a picture of a bikini-clad Pamela Smart and voila, clickbait city.

But before you get ready to pounce on The Rochester Voice for exploiting the sad fate of the former Winnacunnet High media room maven and mastermind in her husband's murder, well get ready to send some carbon copies (does anyone still know what those are?) to some other Northern New England newspapers cause they ran the same Washington Post story, which I'm sure was "embargoed" for Sunday audiences.

Now for those who don't remember Pamela Smart was found guilty of planning the murder of her husband and enticing then 15-year-old Billy Flynn, whom she had a sexual relationship with, and some of his friends to do the deed.

Flynn was the triggerman ambushing Greg Smart in his own apartment on May 1, 1990. Him and his buddies who were involved were all paroled several years ago, but Pam Smart languishes in a Bedford, N.Y., prison with a life without parole sentence.

During the trial, the infamous photo of a bikini-clad Smart surfaced and her story made the rounds of TV talks shows, including Geraldo. Oprah and Phil Donahue.

Smart's was the first murder trial to be televised gavel-to-gavel, and TV couldn't get enough of it.

WMUR ran the entire trial live, where it outshone afternoon soaps. Journalist Joyce Maynard wrote a novel based on the case, "To Die For," that was turned into a film with Nicole Kidman as Smart. A TV movie starring Helen Hunt was also made.

Among the reasons the Post story says she should be considered for release. Well, I guess reporters during her televised gavel to gavel trial often remarked on how her hair looked and how she dressed.

A man wouldn't have to endure such scrutiny, some feminists say.

Other Smart parole aficionados say it's just not right that she's been in stir so long she's never even been able to use the Internet or an IPhone. Oh, the humanity!

So my question is not whether how reformed they have to be to be considered for parole, but how many technology advances must have she missed.

So I guess if you're convicted when they're using an IPhone 3.16, I guess you deserve parole by the time they've introduced an IPhone 10.0. Yeah, that makes sense.

The article even alludes to a belief that, "... even if a jury thought she was guilty, she's been imprisoned long enough."

Wonder what Greg Smart's family thinks about that argument.

The ridiculous and fanciful story also reports that Smart's legal team hopes to convince the state and Gov. Chris Sununu that her sentence is an example of a justice system out of step with modern legal and ethical thinking.

Whaaat? I didn't even know that. I just don't know how to respond.

Well, I do, but I'm trying to save all my chakras and concentration for the Pats game tonight.

Oh by the way the Post story furnished some prison glam shots of the now 51-year-old Smart. However, there were few pictures in northern New England papers of the murdered husband. Guess they thought he's pretty much irrelevant to the story.