The Constitution doesn't need to be fixed. 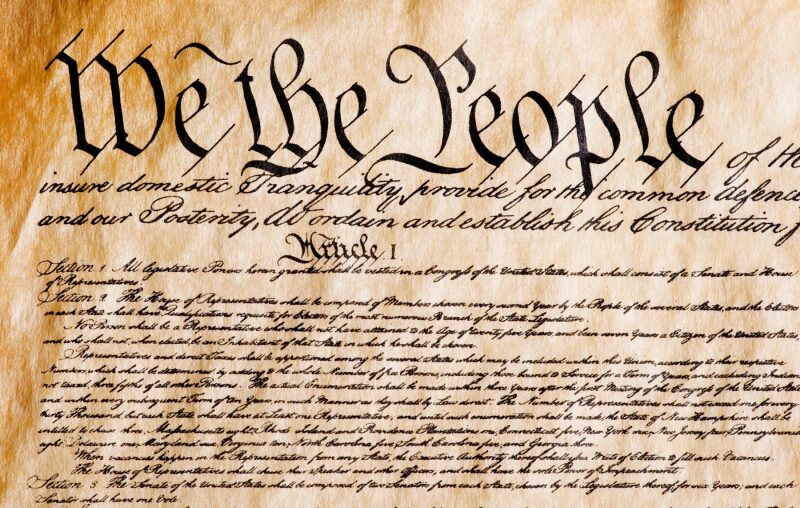 Americans who love liberty should protect it by finding out why George Soros has spent billions of dollars over the past decade to promote Article V Constitutional Conventions (ConCon). Nicole R. Fortune, in a 1/13/21 article recently published in the Granite Grok called, "Article V - Empowering States to Limit the Federal Government; promotes this movement initiated by a power hungry elite who for decades have been attempting to "use" state legislators to call for an Article V Convention of the States. She promotes this cause, quickly brushing off the fact that "George Soros has spent a lot of money on it."
Mr Soros doesn't spend money for nothing. As an active member of The John Birch Society jbs.org, I have opposed this movement first initiated big time in the 1970s that continues to be sold as a way to fix the Constitution with a few amendments. Beware there is an underlying cause to destroy it.
As I see it, the crux of our dilemma in this ConCon war is between:
defenders of the Constitution headed by The JBS who say it isn't broke; and the popular opinion "that the Constitution needs to be fixed with amendments," largely funded by George Soros. President James A. Garfield's powerful observation in the mid-nineteen century, prophetically points the finger at the root cause of runaway federal power: "we the people," - the face that looks back at us in the mirror, as the agent of destruction of our American Constitutional Republic:
"Now more than ever the people are responsible for the character of their Congress. If that body be ignorant, reckless, and corrupt, it is because the people tolerate ignorance , recklessness, and corruption. If it be intelligent, brave, and pure, it is because the people demand these high qualities to represent them in the national legislature.... If the next centennial does not find us a great nation ... it will be because those who represent the enterprise, the culture, and the morality of the nation do not aid in controlling the political forces."
Our 20th president correctly puts the blame where it belongs. Again, at the "face that looks back at us in the mirror." Each party blames the other while the cost of government has skyrocketed into multi-trillions. Big Spenders over the past four decades have falsely deceived taxpayers while they go right on spending for unconstitutional causes, hiding behind a nice sounding slogan, that normally is for a good cause: "I'm for a Balance the budget Amendment." Paralleling this upward rise there has been a downward generational war against liberty slowly capturing the minds of our youth through a patient gradualism in education. Public schools have propagated government curriculums through federal government UNESCO collusion. All this while parental control was slowly taken away.
My response here takes public education to task: without an Americanist biblical curriculum, teachers are victims as well as our children. Public education over several decades has created a philosophy of government without God: creating politicians who play the game that will destroy our Republic so eloquently described by Alexis de Tocqueville in the mid-nineteenth century:
"The American Republic will endure until the day Congress discovers that it can bribe the public with the public's money."
Aware of the fact that "power corrupts the Father of our Constitution , James Madison again reinforces my aim to blame "we the people" for the monster government todays leaders have created:
What is government itself but the greatest of all reflections of human nature? If men were angels, no government would be necessary. In framing a government which is to be administered by men over men , the great difficulty lies in this: you must first enable the government to control the governed; and in the next place oblige it to control itself."
It is asinine to blame the cause of "runaway federal power," on the Constitution, to believe a few amendments will curb the spending appetites of men in power who lust to spend other peoples money to increase their own job security. Robert Brown, JBS expert on the Constitution gives us an example of how vulnerable the public is to deception. He cited at that time the fact that one can confirm by clicking on Freedom Index at thenewamerican.com: " Congress had an overall approval rate of only 20 percent while they had a 97 percent re-election rate. What happened to 80 percent of the people on election day?
Brown defies the ConCon movement in his speech: Rein in Big Government with Article VI , Not V." He claims that Article VI contains the blueprint proposed by the Framers of the Constitution for the several States to use to rein in runaway federal power. The Constitution isn't broke, it just needs to be obeyed. I'll end with Jefferson famous quote:
"Speak not to me of confidence in men, but bind them down from mischief to the chains of the Constitution."
The chains have constantly been broken by self-promoting men and women , "public servants who serve themselves. "The Constitution is blamed at the expense of your liberty. Freedom isn't free! I urge the reader to research this issue thoroughly. I am confident that those who do will oppose this plot to destroy the Constitution through Article V State Conventions.
- Russ Payne,
Merrimack
Read more from:
opinion
Tags:
None
Share: