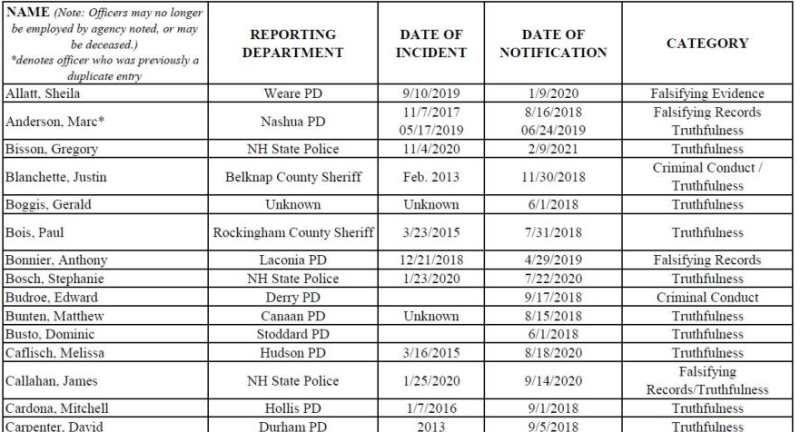 CONCORD - The state's first public and unredacted list of New Hampshire law enforcement officers includes a dozen from local police departments but none who are shown as still serving in those agencies.

The so-called "Laurie List," which tracks officers whose credibility may be called into question during a trial because of something in their personnel records, was released for the first time on Wednesday ending its long-secretive history.

Two former Rochester Police Officers are named on the list: Ian Watt, whose incident date is between May 2018 and April 2019; and Derek Davis, whose incident occurred in 2001. Both were reported as having "truthfulness" issues.

Truthfulness was the issue listed in the vast majority of cases, followed by criminal conduct, excessive force, falsification of records and dereliction of duty.

Prosecutors are required to turn information on dishonest officers over to defendants before trial, but public access has been limited to heavily redacted versions of the list.

A new new state law requires departments to now release the list after a period during which officers can appeal their placement on it.

The Attorney General's Office amended the list, which initially had 90 names, Wednesday afternoon, cutting 10 names because it learned of lawsuits it had not previously been made aware of.

The list's official title is the "exculpatory evidence schedule." It is often referred to as "Laurie List" after Carl Laurie, whose murder conviction was overturned in 1995 after a court determined defense attorneys were not told about poor behavior by a detective involved in his confession.

Below is a list of former police officers from area departments who are on the just-released list.