The drug that gives you pleasure, than takes it all away, is spiking 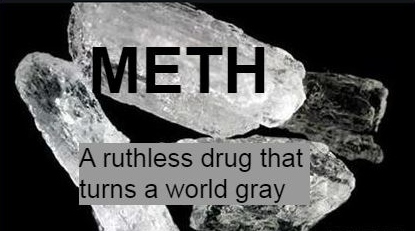 Editor's note: The Rochester Voice today begins a three-part series delving into a disturbing spike in the use of methamphetamine, a singularly pernicious drug that ravages the brain and leaves users unable to find any joy in this world except in its increased use. Today a look at the statistics and how police and prosecutors are reacting to the spike.

When Rochester Police respond to a call for someone who may be on fentanyl they may arrive to find someone slumped over a steering wheel or lying by the side of the street.

With a call for service for methamphetamine it's almost the exact opposite.

"They could be dancing in the street," said Rochester Police Capt. Todd Pinkham recently. "It's far less predictable."

That's because methamphetamines, or meth, is a stimulant, while fentanyl and its organic precursor, heroin, is a depressant.

But it's not only that, experts say. Meth wreaks havoc on the brain, releasing abnormal amounts of dopamine, a naturally occurring neurotransmitter that makes us feel good about ourselves when we accomplish something.

That particular kind of high often makes a user hyperactive, hyper-alert, even euphoric: hence the dancing in the street.

Pinkham said calls for service related to suspected meth use has increased dramatically in recent weeks, and last month some nine meth-use and meth-trafficking indictments were handed down, a third more than those relating to fentanyl.

Possession of meth can result in a Class B felony charge, which carries up to a seven-year prison sentence. Trafficking can get you 10-20 with up to a $300,000 fine, but that hasn't scared off meth users, at least not yet.

Strafford County Attorney Thomas Velardi said last week that he has read many of the police reports regarding law enforcement's interaction with meth users.

"They are behaving differently, and it's very alarming for the rest of us to see," Velardi said.

He also said from his experience with drug court he's learned that meth affects the brain, making it take a lot longer than other drugs for users to "renormalize."

"In some ways the damage (to the brain) is more significant than someone who is recovering from other addictions," Velardi said.

For instance, someone addicted to meth will have a harder time remembering.

"They have no short term memory about things, and will say they forgot their court date," he added.

That's because after a period of time in which dopamine dumped into their brain brings users incredible feelings of euphoria, self-worth and confidence, it destroys the receptors that naturally produce it, leaving them unable to feel any joy or pleasure whatsoever, a condition called anhedonia, which can lead to depression and psychosis.

The street name used by meth addicts for anhedonia is "going gray."

And the grayness can become dangerous.

"It's not unusual for an addict to come to their case manager and say they're not safe," Velardi said.

"If you use and you're hooked, you start to hear things, you start hanging out in your closet," said Cermelj. "You get very paranoid, you chain smoke, you start to feel dirty and out of touch with life.

"You go two days off meth, you want to shoot yourself. The only way to enjoy is get more meth."

Next Monday: The Rochester Voice talks to a DEA agent who details how the drug transitioned from sporadic minilabs operated by individuals across New Hampshire and Maine to Mexico cartels that are now flooding the two states with cheap meth and looking to increase its demand.