The men in this monument stood up for America; governor, will you stand up for them? 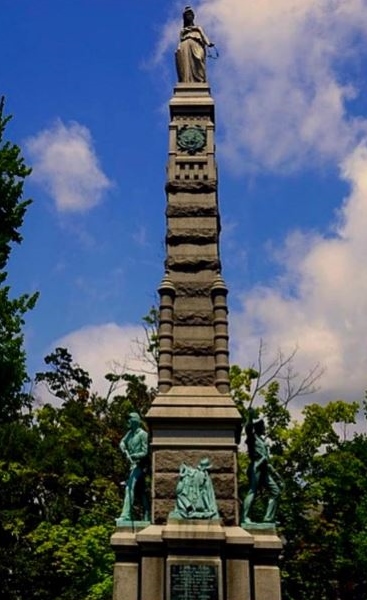 The Soldiers and Sailors Monument in Nashua (Courtesy photo)

Within this Commission, he's appointed a "Co-Founder" of Black Lives Matter, to represent the Manchester Edition.

Gov. Sununu has said that: "Black Lives Matter, has been one of the Leading Voices in the last month."

And the Black Lives Matter (UNH) representative to that Commission, has said; "We will have to compromise, though there are things that I, and others are Not Willing to Budge on"

Well, it seems, The battle lines have been drawn.

So - the Word du Jour is "Conundrum"

There's no clear right answer or no good solution.

It's looking like We Citizens, (adults, children and Our grandchildren's) Future(s) are now (supposedly) in the hands of an "Ad-Hoc Commission."

This brings me to Nashua, NH.

There can be no doubt that this Soldiers and Sailors Monument will become a bargaining chip in everyone's "delusional" concerns.

This monument is at the north end of Main St. at a major intersection, going North - South - East and West.

Why is this one of the bargaining chips?

Because quotes inscribed on the monument are those of Daniel Webster, George Washington, Andrew Jackson, Abraham Lincoln and Civil War Gen. Ulysses S. Grant; statues of the latter four have all been targeted by vandals in recent weeks.

There are pictures in the media of: Daniel Webster's Monument in New York's Central Park. Well ... that seems to be a Work in Progress to topple.

He wrote the "Star Spangled Banner".

The meaning of everything that represents the men and women on these monuments is justification to eliminate all they stood and fought for, in their writings and their deeds.

So does Governor Sununu really expect the citizens of New Hampshire to accept unconditional compromises, on things that Black Lives Matter and others are not willing to budge on?

Just "why" Governor, would you put New Hampshire in the crosshairs of who I consider financially supported rogue militants.

You hold the highest office in the state of New Hampshire.

This is nothing short of gross negligence.

Governor Sununu, this is not a happy warm fuzzy moment in American history.

A very Old yet (still) Wise person once said: When you negotiate between "good" and "evil" = Evil always wins. Why? Because Good is "already" Good.

What about Boscawen Veterans Cemetery? Veterans from unpopular Wars.

Will they demand these graves and monuments be bulldozed?

I surmise, it will become part of their agenda, in this ever evolving paradigm.

I can see the Governor folding like a cheap suit on this matter also.

While you're at it in Boscawen, take in the Hannah Dustin Memorial.

You weren't elected to be a fraternity or sorority house manager, so my question to Governor Sununu is:

Why are you "Gambling" with every "aspect" of New Hampshire's current and future Citizenry?

You ONLY get one Spine, I recommend you use it wisely.