'They sacrificed their lives for world freedom' 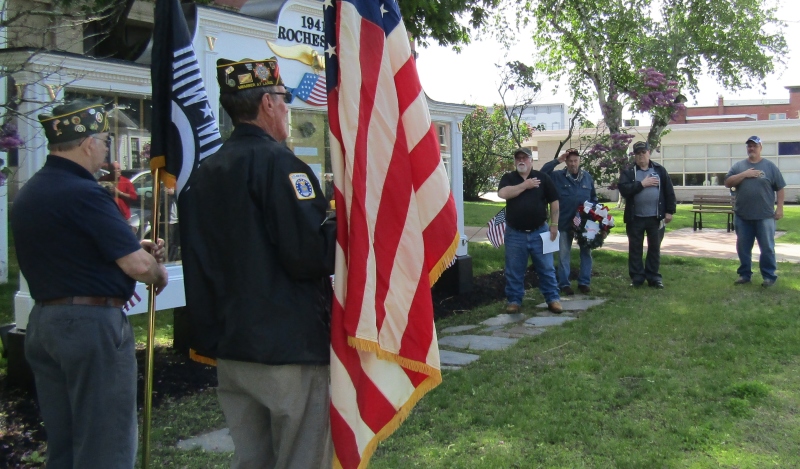 ROCHESTER - A small group of mostly Rochester veterans held a solemn ceremony outside City Hall on Thursday commemorating the 75th anniversary of the D-Day invasion of Normandy June 6, 1944.

Dennis Sellers, president of the Rochester Veterans Council, who led the ceremony, said it was important to hold a local observance to mark the anniversary of the pivotal beachhead battle that paved the way toward triumph over Nazi Germany in World War II.

Sellers said today's veterans of World War II want to be heard by the younger generation.

"The older vets want people to listen to them, to hear what they have to say," he said

Those sentiments dovetailed with those of Norm Sanborn Sr., who served in the Merchant Marine during World War II

"Why don't they teach this in school anymore?" he said. "When I was in school they taught us about the Mayflower and the different wars. They don't seem to do that anymore."

Kevin Tobin, vice commander of Rochester Amvets Post 1, said the 75th anniversary of D-Day was a time to "remember all those who fought and all who gave their lives."

John Morganti, an Army veteran, added, "they sacrificed their lives for world freedom."

The 20-minute ceremony also included the reading of a proclamation from President Trump and ended with the playing of taps.

Sellers noted that the country has to continue to take care of its veterans, adding that the Veterans Van - a mobile unit to help veterans with a wide range of issues - will be at the Rochester Elks on June 28 from 9 a.m. to 4 p.m.