They sent letter asking Sen. Shaheen for help: Her response? Who's Evan Liberty? 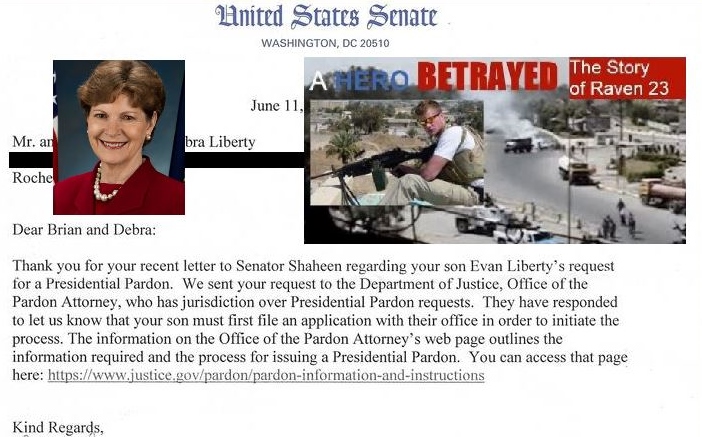 ROCHESTER - When Brian and Debra Liberty of Rochester heard in May that the Congressional Justice for Warriors Caucus was sending a letter to President Trump urging him to pardon the men of Raven 23, they were so excited they immediately wrote U.S. Sen. Jeanne Shaheen to let her know and seek her advocacy in righting a wrong done almost six years ago.

That wrong resulted in the imprisonment of their youngest son, Evan Liberty, on Oct. 22, 2014, for a crime he didn't commit in wartorn Iraq in 2007. Evan turns 38 tomorrow. It will be his sixth birthday spent inside a federal prison in Minersville, Pa.

In a bizarre twist, Shaheen told The Rochester Voice last month that she'd never heard of Evan Liberty, whose widely publicized trial in a Washington courtroom made national headlines in the spring of 2014.

Shaheen, a Democrat, has been a U.S. Senator from New Hampshire since 2009, so presumably she would've been in Washington when the trial took place in the spring of 2014. When he was sentenced

Shaheen, who was interviewed after a Lydall groundbreaking ceremony, said it was possible her office could have gotten some info on Evan Liberty, but it never reached her. Shaheen's press liaison, Sarah Holmes, urged this writer to get in touch with her so she could follow up. Holmes has yet to respond to an email sent her on Monday.

Debra Liberty said they sent the letter to Shaheen because they're fighting for the release of their son, a decorated Marine who grew up in Rochester and attended Spaulding High where he played basketball on the school's varsity team.

"Deb's letter to (Shaheen) was asking for her support for Evan regarding the pardon request," Brian Liberty said.

What they got in return didn't exactly fit their expectation of someone who should be concerned for any constituents wrongly held behind bars, especially a patriot who risked his life overseas.

What they got was an dry "boiler plate" form letter on how to seek a pardon, Brian Liberty said. The letter was signed by Cara Wry, Shaheen's Director of Constituent Services.

Brian Liberty added he was disappointed with Shaheen's response, but not surprised.

"She's been no help," he said last week of Shaheen. "This is all getting too political."

Evan Liberty's wrongful imprisonment after a trial rife with prosecutorial misconduct, including withholding exculpatory evidence, threatens to become even more political, however, as Raven 23 has recently been dubbed "The Biden 4."

Why? Because it was Vice President Joe Biden who went to Baghdad in January 2010 - just weeks after a federal judge dismissed all charges - to guarantee Iraq's president that the Obama administration would be continuing its quest to put the men of Raven 23 in prison.

The events leading to the Nisur Square incident began the afternoon of Sept. 16, 2007, when a powerful bomb went off outside the Green Zone in Baghdad and a Blackwater team escorting a diplomat had to get them to safety as fast as it could. Evan Liberty's tactical support team - named Raven 23 - raced to secure a traffic circle so the first Blackwater team could safely reach the Green Zone."

As what appeared to be civilian traffic mostly either slowed or turned back, a white Kia driving on the wrong side of the road approached the roadblock where Blackwater Team Raven 23 was securing the circle.

Evan Liberty and the three others charged in the attack then say what appeared to be Iraqi police began firing at Raven 23, initiating a furious exchange that federal prosecutors said left at least 14 Iraqi civilians dead and many more wounded.

It should be noted that using civilians as shields was a favorite Iraqi insurgent strategy during this time of the war.

Dustin Heard, Nick Slatten and Paul Slough were also imprisoned in the Raven 23 case, with Slatten facing life in prison. The other three got 30-year mandatory guns sentences even though they were using guns supplied to them by the U.S. Dept. of State.

The guns sentences were tossed by an appeals court who said they represented "cruel and unusual punishment."

The same judge who presided over their trial in 2014 resentenced Evan Liberty to 15 years last September, which means he won't get out until around 2030, when he'll be 48.

In their letter to President Trump, the caucus cites many accounts from witnesses who saw incoming fire on Raven 23 from the square.

"Another Iraqi witness described seeing an individual dressed as Iraqi police shooting in the direction of the U.S. security team," a press release from the caucus notes.

"Unfortunately, the Iraqi government conducted a corrupt investigation into the incident and the liberal media amplified many false accusations against these warriors, wrote U.S. Rep. Paul Gosar, R-Ariz. "It was Hillary Clinton and Joe Biden who pushed for further prosecution, a truly unconscionable move given the facts of the case."

The letter to Trump details a myriad of prosecutorial missteps including withholding exculpatory evidence and improperly utilizing sworn statements by the veterans which were provided under the promise of immunity.