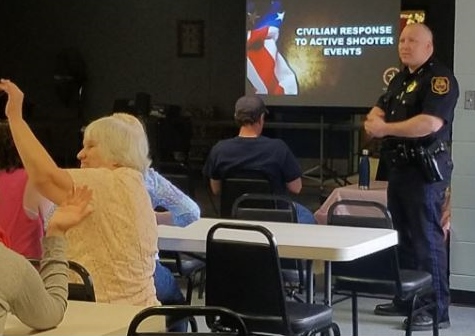 The chances of being involved in an active shooter situation are probably about as slim as getting hit by lightning, but we all know enough to get inside during a thunderstorm. You sometimes don't have that chance if you're inside a restaurant when some nut starts firing a gun.

That's why the active shooter classes being taught around the city by Rochester's Deputy Police Chief Gary Boudreau are so important.

Boudreau has been teaching the class for three years, and he says he gets nothing but good feedback from class takers.

He said one of the most astonishing things he sees from the students is that many "have never thought about it," he says.

But he says that there are definitely things you can do to give yourself a better chance of survival if you ever do confront the unthinkable.

"There are some tactical advantages," he says. "Action always beats reaction. Remember this is your life; you do what you have to do to survive."

Boudreau says he shows portions of videos involving active shooter situations and then points out things that folks can do to save themselves and others.

"I make it a point to tell them that it's OK to defend yourself," he said.

The acronym that serves as a cornerstone of what should be everyone's strategy is ADD, he says. Avoid. Deny. Defend.

To that point, you want to get away from where the shooter is, deny them access to you if possible and take offensive action when there is no other choice.

Boudreau said whenever we're in public we should be aware of our surroundings and mindful of those around us.

If you're at a restaurant you might want to sit with your back to the wall, he said. Everyone's different.

It's sort of the same as crossing the street. Look left, look right, look left again.

Pretty soon it's second nature. And maybe you, your family and everyone else for that matter are safer for it.