Thirteen ways of looking at electric rates in N.H. 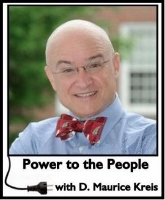 Recently the Business and Industry Association of New Hampshire was kind enough to invite me to address its annual energy symposium to talk about our state's electricity rates. The BIA framed its query to me as it always does when this subject comes up: Why are electricity rates so high?

It is a loaded question.

In 1917, a Connecticut insurance executive named Wallace Stevens published what became a famous poem, "Thirteen Ways of Looking at a Blackbird." The point was that even something as everyday as a blackbird could be usefully described in numerous ways, yielding truths far removed from the realities of feathers and flight.

What I told the BIA can be distilled down to 13 observations that I share here in the spirit of Wallace Stevens. As a high official of the Hartford Accident and Indemnity Company, Stevens would (I hope) appreciate my resolve to confine my observations to the true and verifiable.

In his 1917 poem Wallace Stevens wrote that "when the blackbird flew out of sight, it marked the edge of one of many circles." (In fact, that's the entirety of Stevens' ninth way of looking at a blackbird.) It is reminiscent of a similarly poetic phrase - "zone of reasonableness" - coincidentally coined that same year by Justice Louis Brandeis of the U.S. Supreme Court and widely adopted since then.

Brandeis was talking about how far rates could soar before violating the statutory "just and reasonable" standard. That's one bird we cannot afford to see flying out of sight.

Power to the People is a column by D. Maurice Kreis, New Hampshire's Consumer Advocate. Kreis and his staff of four represent the interests of residential utility customers before the NH Public Utilities Commission and elsewhere. It is co-published by Manchester Ink Link and InDepthNH.org and distributed as a public service to news outlets across the state.