This is one cool place, and we're not blowin' smoke 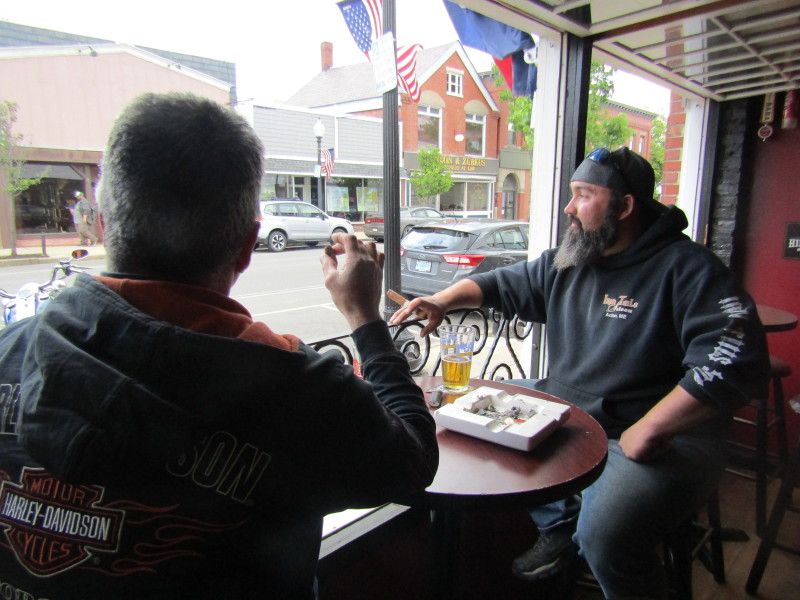 Rick Flynn, left, of Saco, Maine, and Richard Mondor of Lyman, Maine, enjoy a beer and cigars while looking out on North Main Street at the On The Rox Lounge on Friday. (Rochester Voice photos)

Editor's note: This is another in The Rochester Voice's occasional series on places to eat, drink and have fun in the Lilac City.

ROCHESTER - Rochester is blessed with a plethora of inviting watering holes, but there's only one where the smell and taste of a fine cigar can be savored with a top shelf Kentucky bourbon or a nicely aged imported scotch.

Actually, with its richly appointed smoking room and exclusive members-only Radler's Den lounge, Radloff's Cigar Shop & On The Rox Lounge is more a club than a bar, its patrons possessing a singleness of purpose, namely the enjoyment of paring a good microbrew or single malt with that perfect stogie.

That's where the staff at Radloff's come in.

"If you're having a certain microbrew and tell us what you like in a cigar, we'll point you to the right choice," said bartender and cigar aficionado Kayla Durocher, the daughter of Jamie Radloff who owns the North Street business.

Durocher said her father believes in trying to cater to a varied clientele. "He thinks of this as an upscale club," she said of her dad. "A place where you can play, drink and smoke."

And there definitely is a club aspect here, as you can buy a $200 or $300 annual membership that gives you discounts on cigars, beer and top shelf liquors, exclusive entry into the Radler's Den lounge and even your own cigar locker with humidor.

On The Rox Lounge carries about a dozen microbrews that come in "logs," about a fourth the size of kegs, so they rotate out quickly to make way for a larger variety," explained Durocher.

Meanwhile, their bourbon selection is second to none, with regulars like Maker's and Knob Creek, but also some interesting choices like Angel's Envy and Booker's Small Batch.

Durocher said they're also known for their "Mean Martinis," including one of their best sellers, the Hot and Dirty, made with vodka, dry vermouth, olive juice, pepperoncini and tabasco.

"You can get it heated from one to four," Durocher quipped.

But Radloff's is as much about playing as it is smoking and drinking. They play their own version of Family Feud every Wednesday and every Thursday is Jeopardy. Both games award prizes for winners, who then get a chance for an even bigger monthly prize drawing.

They also have two annual events that draw crowds: '80 Night in August and Speakeasy Night in April.

But while there's a lot of excitement during special events and on game nights, there are those summerlike days in June when you just want to sip on a beer, enjoy a cigar and watch the world go by.

"We're just having a smoke and enjoying the view," said motorcyclist Rick Flynn, of Saco, Maine, as he relaxed at a window table with a buddy on Friday. "This is better than Laconia."

For more info on Radloff's Cigar Shop & On the Rox Lounge click here.