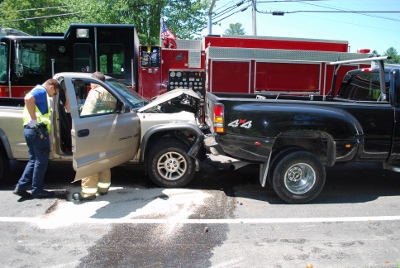 GONIC - A Farmington woman was charged with drunken driving after police say she rear-ended a vehicle stopped in traffic on Gonic Road on Friday in a three-car crash that injured three, including herself.

Police say it happened around 12:50 p.m. when Megan Morrison, 21 of Farmington, was operating a 2002 Dodge Dakota pickup truck northbound when she struck a 2007 Chevrolet Silverado driven by Mark Hale, 63, of Dover, that was stopped in traffic at the Oak Street intersection. The impact forced his truck into the rear of a 2012 Honda Civic operated by Michael Mills, 24 of Dover.

Neither Morrison nor her passenger was wearing seat belts at the time of the collision. Both were transported to Frisbie Memorial Hospital for serious injuries.

Morrison was later transported from Frisbie Memorial Hospital to the Portsmouth Regional Hospital due to the extent of her injuries. She was eventually charged with felony level driving While Intoxicated as evidence of both alcohol and drug use were found in the vehicle, as well as Negligent Driving and Operating After Suspension. She also had a bench warrant for failing to appear.

Hale was transported to Wentworth-Douglass Hospital for unspecified injuries. There was no report of injury to Mills. Morrison's passenger was not identified.

The accident remains under investigation. If anyone has any further information pertaining to this crash, please contact Ofc. John Gantert of the Rochester Police Department.