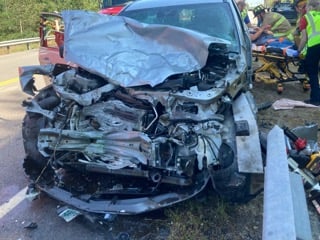 First responders work the scene of a three-vehicle crash in front of Tractor Supply on Saturday. (Rochester Police photo)

ROCHESTER - Three motorists were seriously injured on Saturday in a three-car collision in front of Tractor Supply on Farmington Road.

The contact caused the Titan to lose control and cross into the southbound lane, striking a Chevrolet Equinox operated by Kyle Quigley, 29, of Farmington, head on.

Both Clough and Quigley had to be extricated. Clough, Quigley and a passenger in his vehicle all sustained serious, but what were described as nonlife threatening injuries and were transported to Frisbie Memorial Hospital for treatment.

Neither alcohol nor drugs appear to be factors, but the cause of the accident remains under investigation, and police say charges are likely.

Farmington Road between Walmart and the Farmington town line was shut down for a period of time as responders worked the scene. It reopened around 3:15 p.m.