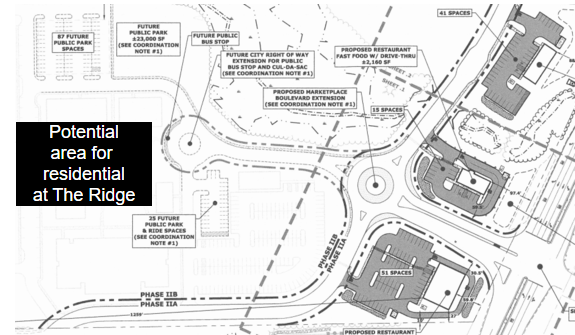 Schematic shows the proposed location of three restaurants, along with roundabout and extension of Marketplace Boulevard. (Courtesy image)

ROCHESTER - Plans are in the works for three additional restaurants at The Ridge, two of which are expected to have drive-thru windows.

The three eateries will be located next to each other just east of the current eastern-most entrance (nearest to downtown) on Route 11.

The plans are included in a new application submitted by Farmington Associate Properties LLC and will be taken up at Monday's planning board meeting.

The new construction is part of The Ridge's Phase II development, which could be amended to allow residential housing within The Ridge's TIF district if the City Council approves the change on Tuesday.

TIF, or Tax Incremental Financing, uses funds generated from the difference between the value of an improved property and the frozen base value to pay for infrastructure like water and sewer, sidewalks or even urban trails or recreation. All the TIF money has be used within the TIF district.

Phase II, which consists of 26 acres, has been separated into Phase IIA and Phase IIB, with Phase IIA comprising the three restaurants, the extension of Marketplace Boulevard and a roundabout to be constructed at the intersection of Market Place Boulevard and Crane Drive, which will be extended across Route 11. That intersection will have a full set of lights, said Mike Scala, Rochester economic development director.

Scala, who is hopeful the residential change can be OK'd, said recently this type of mixed use lifestyle center - where housing, retail, entertainment and dining all intersect - is "a trend that has been happening for years."

"These apartments are going to be market value and very nice," he said. "This only solidifies the health of The Ridge's TIF district."

He said if both changes are approved he will present plans to the City Council sometime this month.

Phase II at The Ridge was originally developed with a concept of having restaurants and entertainment venues like a bowling alley and cinema, but with market trends and the pandemic, nothing along those lines has materialized, making the prospect of a residential option more attractive.

Scala said the residential potential within the current Ridge TIF district has long been considered a viable option as part of its development with former economic development director Karen Pollard building the groundwork back in 2017.

The COVID-19 pandemic just accelerated the pace, he said.

"We've been looking at it for a bit, but the coronavirus and changes in the market just accentuated what we had planned," Scala added. "Office space demand was going down before the pandemic. Now it's basically been cut in half."

A schematic submitted as part of the Phase II application shows the potential for other residential amenities like a public bus stop, a cul-de-sac, a 23,000 square foot public park and a 25-space Park and Ride.