Thrills, chills and a lot of laughs under the Big Top at Lilac Mall 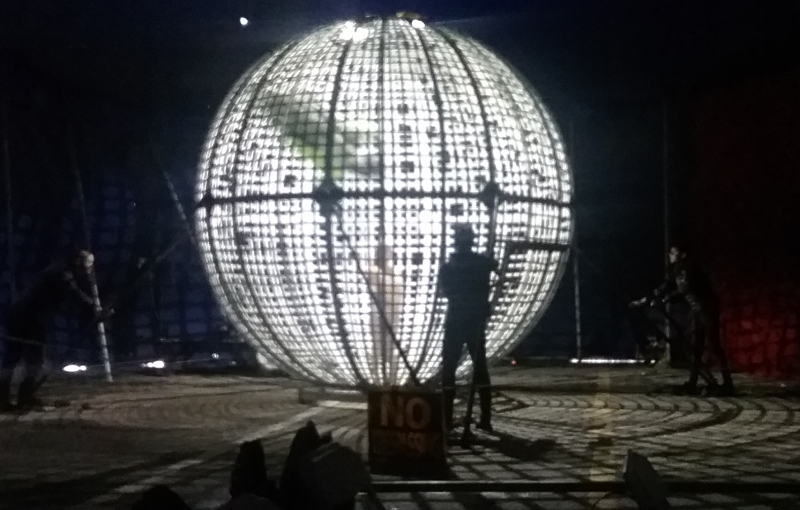 A motorcycle rides up and down inside a transparent globe just inches away from a female with the troupe during the Great Benjamins Circus at the Lilac Mall. (Rochester Voice photos)

ROCHESTER - Fast on the heels of last month's Circus Hollywood at the Rochester Fair came an equally impressive troupe of performers on Saturday at the Great Benjamin's Circus at the Lilac Mall.

Highlighting the events was the final act in which a man was shot out of a cannon some 120 feet onto a blown-up safety pad to the delight of several hundred parents and children who watched the high-flying spectacle.

The hour and a half show featured aerialists, acrobats, contortionists and clowns as well as the wheel of death in which a performer stands atop a wheel as it spins up and down; and a hair-raising stunt in which a motorcyclist rides up and down inside a sphere just inches from a female member of the troupe who is also inside the orb.

Circus consultant Louis Leonard said the circus organizers work hard to bring together a talented crew of performers to bring families together to enjoy an afternoon of family style entertainment.

parents can hop in and take a ride inside the Big Top. Children could also get their faces painted during the performance timeout.

One of the most entertaining acts was the comedic dueling jugglers who sometimes jostled as they tossed plates, knives and other assorted items into the air.

Another almost squeamish sight was that of a talented contortionist who was able to do incredible things with her lithesome body.

The circus leaves town after two shows today, one at 2:30 p.m. and a closing performance at 5 p.m.

Circusgoers will also enjoy the convenience. After the show is over, you don't have to walk to the parking lot, cause you're already in it!