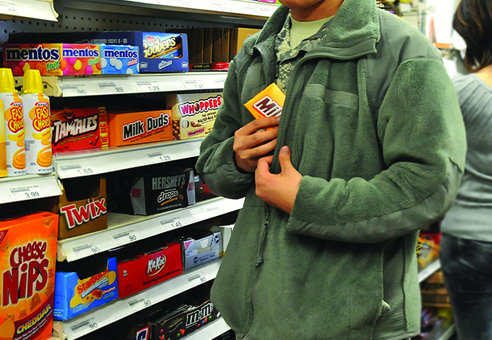 Shoplifting, as shown in this generic image, is on the rise in Rochester, police say. (Courtesy photo)

ROCHESTER - While they don't know why, Rochester Police say they have seen a recent uptick in willful concealment and thefts at local stores.

"We have seen an increase in these crimes recently," said Rochester Police Capt. Todd Pinkham. "Over the weekend, Saturday and Sunday, we made 10 arrests."

The distinction between the two offenses is that willful concealment, formerly known as shoplifting, refers to when the suspect is caught before leaving the store, while theft by unauthorized taking applies when they have exited the premises.

Withing the theft statute there is a further distinction that an offense where the value is under $1,000 is considered a Class A misdemeanor punishable by up to a year in jail, while over $1,000 is a Class B felony that can draw up to a seven-year prison sentence.

Last weekend's incidents include one in which a man shopping at Walmart was seen eating hot deli items and discarding the packaging as he sauntered about the store on Saturday, and another in which three men who were together were arrested on theft charges alleged at Walmart Sunday afternoon.

In fact nine of the 10 arrests occurred at Walmart, which is a frequent target for shoplifting and theft.