To Serve and Protect and share a good laugh with, too! 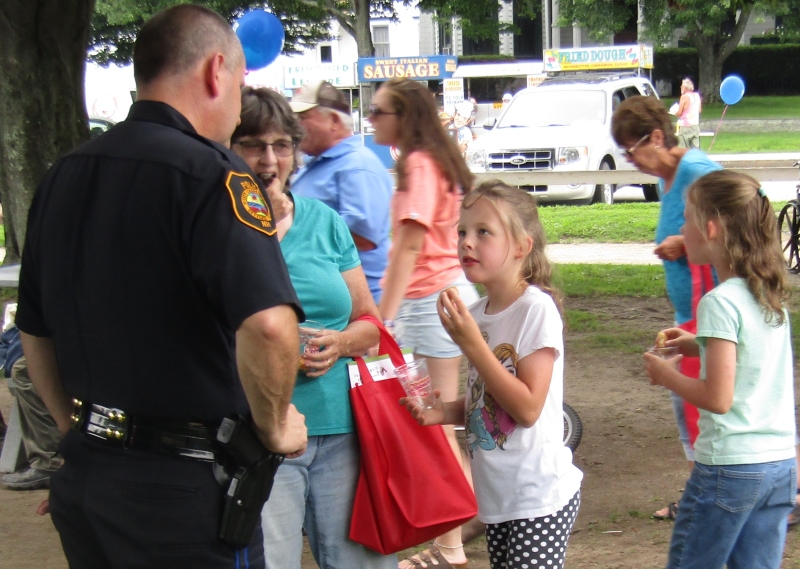 ROCHESTER - Rochester's Top Cop heard many a compliment for his department's efforts on Tuesday at Rochester's National Night Out celebration on the Common, but there was also the occasional complaint, even jokester as well.

The annual event held nationwide provides a setting in which the public can interact with law enforcement in a nonthreatening, relaxed manner that is often lacking when police and the public normally interact, said Rochester Police Chief Paul Toussaint.

Through much of the afternoon and evening Toussaint stood just steps from the bandstand to greet, converse and joke with residents, even fielding a complaint or two, all in good humor.

One elderly lady drew herself up as she approached the chief and remarked she was a little chagrinned that some of the handicapped parking spaces on the Common were taken by vehicles that didn't show a handicapped license plate.

Toussaint assured her that was a serious offense and that he'd look into it.

"No, no you're absolutely right," Toussaint replied.

Then a couple of minutes later young twin girls from Massachusetts came up with their grandmother who's from Barrington.

One of the twins, Lillian Claffoe, had a question for Toussaint, whom she didn't recognize as chief, said the grandmother.

"Put away any bad guys lately?" the precocious youngster quipped.

Through it all Toussaint maintained the resilient smile many have come to know and trust.

And so it was throughout the Common as police on bikes, with K-9s and just walking about in uniform mingled with the public they protect on a daily basis around the clock.

Among them were Rochester Police and Strafford County Sheriff's K-9 unit Keith MacKenzie and his bloodhound Gunner, who always draw a crowd.

It was just February that MacKenzie lost his longtime partner, renowned bloodhound Daisy Mae, who was also a crowd favorite.

Adults and kids alike descended on Gunner to pat his head and touch his trademark floppy ears.

Some said the oppressive heat on the heels of a long heat wave may have kept the crowds down a bit from last year, but there was still plenty to enjoy on a pleasant August evening.