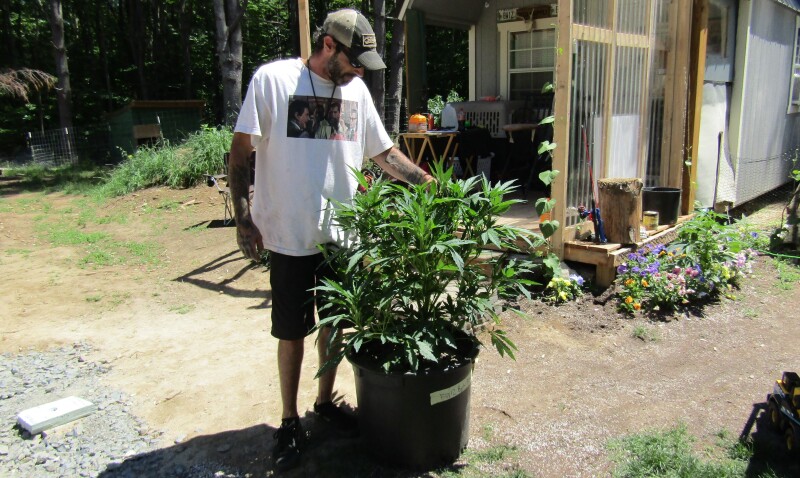 Eric Kelley with a plant grown from one of the plants taken from his property last summer. (Rochester Voice photo)

LEBANON, Maine - If anyone other than Lebanon town officials had taken livestock and $100,000 worth of cannabis seeds from a town farm and grow house, they'd probably be under arrest on theft and burglary charges.

But 10 months after the incident no charges have been filed against either of the two selectmen involved in the case - Charles Russell and Ernest Lizotte - or animal control officer Carol Harris.

The three are listed as suspects in an investigatory report obtained by The Rochester Voice and filed by Maine State Police Trooper Patrick Hall, who got involved last Aug. 24 when town animal control officer Mary Kinney spoke with him regarding an animal complaint of pigs rutting up a neighbor's yard.

The pigs in question belong to Eric Kelley, who beside raising pigs, cows, goats and chickens, also raises award-winning cannabis seeds recognized nationwide as producing some of the highest concentrations of THC on the market.

As Hall began to investigate he quickly learned the owner of the property, Kelley, was being held at York County Jail on a probation violation and might be there some time.

While relaying the information to Kinney, she asked him to respond to the property as she thought there was someone there "hiding in a shed," the report states.

Upon arrival Hall spoke with both Harris and Kinney, who said she wanted to remove the livestock because the cows were "dying of thirst" and "goats were starving."

According to the investigatory statement, Trooper Hall advised her to obtain a court order before seizing the animals, but she refused.

Before searching the shed, Hall stated he turned on his cruiser's WatchGuard video as it became clear the incident may turn into an enforcement issue.

Hall, who also owns farm animals, inspected the cows and goats, who all appeared well-fed and groomed, he said.

Hall also noted in his report that a large greenhouse on the property was filled with lush, adult marijuana plants.

Later that night he got a call from York County Jail informing him that Kelley's father was watching the property and feeding and watering the animals. The property address is not being released by The Rochester Voice at the request of Kelley.

Two days later Hall learned that 15 of the marijuana plants had been removed as well as a couple of Husqvarna saws, several power tools and a boom box.

While attending a subsequent Lebanon Board of Selectmen's meeting on Aug 27, Hall spoke with an unidentified individual, who said Russell and Lizotte were involved in the case.

According to Hall's statement both Russell and Lizotte said they removed the plants because they were concerned they would "get into the hands of the wrong people."

Russell added that (name redacted) "called and said the plants were not tagged and had no fence around them. (Name redacted) also said the property owner was "going away for a few years."

When Hall asked Russell what authority he had to take the plants, he replied, "He did not take any, he just helped other people do it," the statement reads.

Hall also asked Russell if he had "tagged the plants" with identifying info and he said he had not.

On Aug. 30 Hall visited Lizotte's residence and found the plants out behind his house, but neither tagged nor or inside a fence.

Asked what right he had to take the plants, Lizotte replied he was following the orders of (name redacted) and Russell, the report states.

A few days later Hall spoke with Kelley, who said (name redacted) had called him and said, "she had all his plants ... did not want to get the police involved ... and to get the plants back to Kelley."

Twenty minutes later Hall visited (redacted) and said "the plants had many brown leaves and appeared to be unhealthy."

Finally, on Sept. 12 Hall visited the property and served as the go-between as Lizotte and several other unidentified people dropped off 16 plants, most of which were in poor condition, according to Kelley.

Some 10 days later Kelley told Hall he wanted to press charges, and it was turned over to the York County Attorneys Office.

Hall noted that on Feb. 10, he was informed they were not prosecuting the case, but when The Rochester Voice called on Wednesday, the office said Russell's case was still "under review," while the case against Harris and Lizotte was not.

Speaking today, Kelley said he is furious that town officials took it upon themselves to remove his animals and his cannabis plants without a seizure order or even trying to contact him at York County Jail, where they knew he was.

"They feel like they're the police," he said. "There's no justice."

He said they took seven pigs, two cows, two goats, and 12 chickens and he they still haven't been returned.

He said any claims that the animals have been wanting for anything are unfounded, saying in an email to Hall that he had been "trucking in 259 gallons of water at a time until my well is installed."

He also said his (animals) get a full truck load weekly from When Pigs Fly bakery and he gets out-of-date produce and fruit from Hannafords.

Kelley said he had expected charges would've been brought against someone in the case, but when they weren't he began to consider hiring a lawyer "to hold them accountable," however an ongoing divorce and family issues have kept him occupied the past several months.

He said that's when he decided to go public with a Portland TV station and The Rochester Voice.

"I want some questions answered and have them held accountable," he said, adding he may be seeking damages of up to $100,000 for his cannabis losses.

He said he is on the agenda for tonight's Board of Selectmen meeting and he plans to be there.

Selectboard chair Russell did not respond to phone calls or a text message on Wednesday.

Reached today by Facebook PM, Lizotte said he would have no comment on today's article in The Voice..