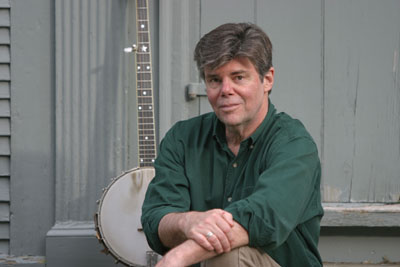 ROCHESTER - Traditional New Hampshire Folk Singer and musician Jeff Warner will be the feature at the Friday Music On The Square Concert in downtown Rochester.

Music On The Square will run the 2016 season on Fridays through Aug. 26, 11:45 a.m. until 1:30 p.m. Concertgoers are asked to "bring a chair and buy or bring a lunch" to enjoy a musical performance in the heart of downtown Rochester. Canopies are erected among the flowers in the square to provide shade for the concert attendees.
Warner is among the nation's foremost performer/interpreters of traditional music. His songs from the lumber camps, fishing villages and mountain tops of America connect 21st century audiences with the everyday lives and artistry of 19th-century Americans.

"Providing more than just rich entertainment, Jeff will leave you with a deeper appreciation of the land you live in," one concertgoer said.

His songs, rich in local history and a sense of place, bring us the latest news from the distant past.
Warner grew up listening to the songs and stories of his father Frank Warner and the traditional singers his parents met during their folksong collecting trips through rural America. He accompanied his parents on their later field trips and is the editor of his mother's book, Traditional American Folk Songs: From the Anne and Frank Warner Collection. He is producer of the two-CD set, Her Bright Smile Haunts Me Still, the Warners' recordings of rural singers, many of them born in Victorian times.

"The scion of one of the nation's most eminent families of folksong collectors, he represents a tradition that is fundamentally unbroken since preindustrial times," noted Stuart Frank, Senior Curator, New Bedford Whaling Museum.

Warner has performed widely, from large festivals in the UK, to clubs, festivals and schools across America. He plays concertina, banjo, guitar and several "pocket" instruments, including bones and spoons. And "he inhabits a song in a way which few singers can do" (Royal Oak Folk Club, Lewes, UK).
A native of New York City, Jeff has lived in Portsmouth since the late 1990s. He is an artist for the New Hampshire Council on the Arts, a speaker for the New Hampshire Humanities Council and was a 2007 State Arts Council Fellow.

In case of inclement weather the concerts will be canceled and notices will by posted by 10 a.m. and on Rochester Main Street's Facebook page. Free parking nearby is available at the North Main, Union, City Hall and Congress Street Parking lots. For more information please contact the Rochester Main Street office by calling 603-330-3208 or email director@rochestermainstreet.org. Coming up on Friday, July 8 will be folk singers Susie Burke and David Surette.

The series is sponsored by Federal Savings Bank and a grant from the NH State Council On The Arts/National Endowment For The Arts,