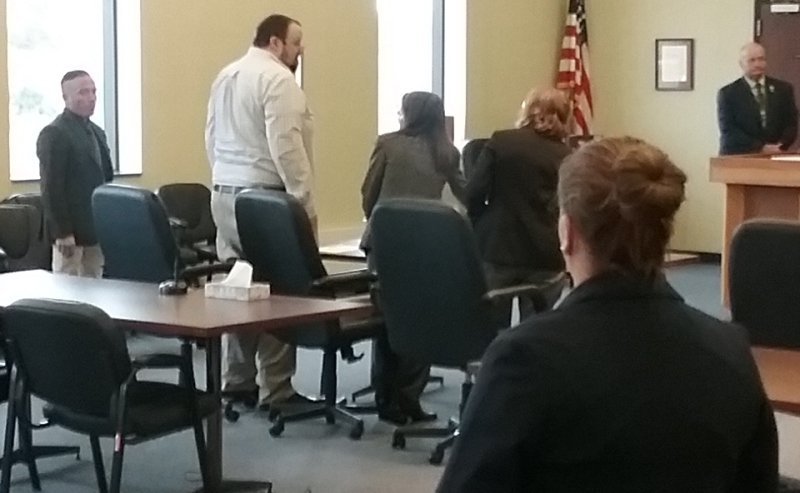 FARMINGTON - The jury in the Timothy Verrill murder trial on Friday morning got their first and only look at the Farmington house where the two women he is accused of stabbing and bludgeoning to death died.

Verrill, 37, of Dover, his defense team, several Strafford County Sheriff's deputies and other law enforcement officers arrived at the scene of the January 2017 killings about a half hour ahead of the jury.

They stood about twenty yards to the west of the residence, while news media and the public were kept behind a grove of young trees in front of the house.Meaderboro Road near the residence was lined with law enforcement vehicles, while a SCSO drone hovered high overhead.

Verrill, unshackled and dressed in khaki trousers and button down white shirt, at times smiled as he talked with the group in the cool morning air under a mostly sunny sky.

He is charged with first degree murder in the deaths of Christine Sullivan, 48, of Farmington; and her friend, Jenna Pellegrini, 32, of Barrington on Jan. 27, 2017.

The killings occurred at 979 Meaderboro Road, which at the time was owned by Dean V. Smoronk, a convicted drug trafficker and longtime boyfriend of Sullivan.

Presiding Judge Steven M. Houran told the jurors before their visit to the two-story structure that looking at the property was "evidence" in the case, but prohibited them from visiting the property again.

Prosecutors said they would not be entering the home as it is considered condemned and hazardous.

Meanwhile, one of the star witnesses in the case, Smoronk, 57, is facing at least five years in federal prison for drug trafficking when he is sentenced in December in federal court in Concord.

Smoronk, who was in Florida at his second home in Cape Coral at the time of the killings, has been named as a potential witness for both the prosecution and the defense in the upcoming trial.

During a bail hearing two years ago, State Police Sgt. Brian Strong testified that Verrill went to Smoronk's house allegedly to get drugs around 11 p.m. on Jan. 26, 2017, and that a friend of Verrill's told police that when he got to the friend's Farmington home early Jan. 27, Verrill said he thought Pellegrini was an informant.

Smoronk told investigators that Sullivan contacted him that Verrill had returned to the house about 2 a.m. Jan. 27, with phone records showing Smoronk and Sullivan were on the phone around that time, Strong noted.Strong is listed as a witness for the prosecution.

Verrill was arrested in Lawrence, Mass., on Feb. 6, 2017 while seeking treatment at a medical facility.

Evidence in what prosecutors characterize as a "complex" case is expected to include thousands of pages of documents as well as dozens of CDs containing audio recordings and photographs, even an Alexa voice assistant. The case summary alone is 37 pages.

If Verrill is found guilty of first degree murder he could face life in prison without parole.

Scores of civilians, including many local residents have also been named as potential witnesses as well as dozens of state and local police officers and expert witnesses from as far away as Georgia and Virginia.

Much of the evidence to be presented during trial remains sealed.