Tulsi Gabbard will take to the Castle for Wednesday Town Hall 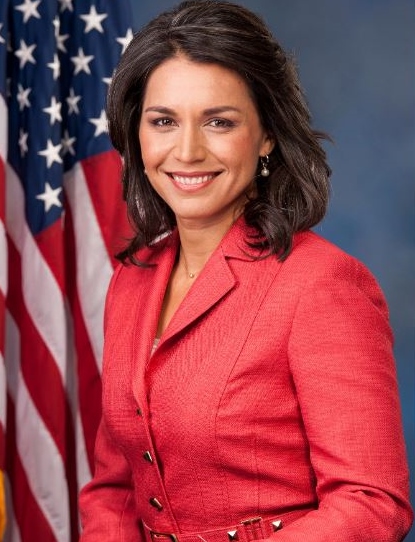 Gabbard, a Congresswoman who represents Hawaii's 2nd district, will hold her Town Hall at the Castle on Charles on Charles Street from 5:30-7 p.m.

Gabbard, who joined the armed forces following 9/11, has served two deployments to the Middle East, including one as a combat field medical office in Iraq in 2004.

Now a major in the Army National Guard, Gabbard has proved on the debate state over and over again she doesn't back down from anything or anyone.

In July when she was still largely an unknown except for her billboard on Route 16 Southbound in Milton, Gabbard took down Harris at a Democratic debate for joking about using pot in college and later locking up more than 1,000 Californians for smoking weed when she was the state's attorney general.

In October when Hillary Clinton dismissed Gabbard as a "Russian asset," Gabbard fired back, calling the former first lady and Secretary of State "the queen of warmongers, embodiment of corruption, and personification of the rot that has sickened the Democratic Party for so long."

Earlier this month, after Joy Behar of the "The View" had oft-referred to the Clinton line that Gabbard was some sort of Russian "asset," she sounded off on the show in her opening remarks.

"I want to start with something I think is also important about facts because recently on your show here some of you have accused me of being a traitor to my country, a Russian asset, a Trojan horse or a useful idiot, I think is the term that you used, which basically means that I am naive or lack intelligence," Gabbard railed.

Behar responded by whining about how much Gabbard had appeared on Fox News.

And just days ago she sparred on foreign policy with Buttigieg, citing his "inexperience in national security and foreign policy" and criticizing his stance on sending U.S. troops to Mexico to fight the cartels.

Buttigieg countered by attacking Gabbard for meeting with Syrian dictator Bashar al-Assad, provoking Gabbard to respond, "You lack the courage to meet with both adversaries and friends. I take the example of those leaders who came before us. Like JFK who met with Kruschev, like Roosevelt who met with Stalin ..." at which point Buttigieg interrupted, "Like Donald Trump who met with Kim Jong Un?"

As a few Buttigieg supporters hooted and hollered at his hoped-for takedown, an unflappable Gabbard didn't miss a beat, pushing her own message of leadership and strength to strong applause.

Gabbard is currently polling 5th in New Hampshire with less than three months before the first-in-the-nation primary.

The Castle is located at 19 Charles St. Rochester.

To secure a spot at the Town Hall click here.