Tulsi's strength of purpose, courage of conviction have our vote on Tuesday 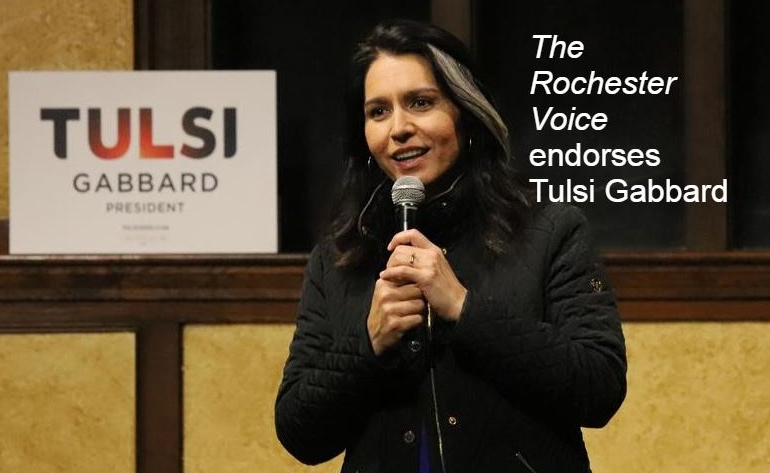 When Granite Staters go to the polls tomorrow, they will see on the ballot a bloc of candidates who are collectively further to the left than any group of presidential hopefuls ever assembled.

But among that group is one candidate who has staked out her own vision, one that is unafraid, unwavering and unabashedly optimistic.

Hawaii Congresswoman Tulsi Gabbard has already shown she can stand up to some of the most powerful in the Democratic party like Hillary Clinton, who claimed Tulsi was a Russian asset.

"If Hillary Clinton and her allies can successfully destroy my reputation - even though I'm a war veteran and a sitting member of Congress - then they can do it to anybody," Gabbard said soon after. "I will not allow this blatant effort to intimidate me and other patriotic Americans into silence go unchallenged."

During an early debate she basically took out Calif. Sen. Kamala Harris, who laughed about smoking pot in high school but later as a state Attorney General sentenced marijuana offenders to years in prison.

At a following debate she sparred on foreign policy with South Bend, Ind., Mayor Pete Buttigieg, citing his "inexperience in national security and foreign policy" and criticizing his stance on sending U.S. troops to Mexico to fight the cartels.

Buttigieg countered by attacking Gabbard for meeting with Syrian dictator Bashar al-Assad, provoking Gabbard to respond, "You lack the courage to meet with both adversaries and friends. I take the example of those leaders who came before us. Like JFK who met with Kruschev, like Roosevelt who met with Stalin ..." at which point Buttigieg quipped, "Like Donald Trump who met with Kim Jong Un?"

Unflappable as always Gabbard ignored Mayor Pete's cheap shot and reminded the audience that she would do anything to reduce necessary foreign intervention that would put our servicemen and women in harm's way.

Anyone who thinks Tulsi would be a shrinking violet on the debate stage with anyone, including President Trump, is wrong.

Tulsi may be to the left of some moderate Democrats, but she's not crazy left.

Here is some of her platform.

She's against nation building and constant foreign wars and intervention.

She believes in a single payer path for the uninsured, but would allow anyone who wants to keep their private insurance to do so.

She believes in the right to bear arms, but wants commons sense bipartisan action to ban bump stocks and strengthen background checks.

She believes in securing out southern border, while giving Dreamers the right to stay in the only country they know and ensuring families are not separated.

On abortion she supports codifying of Roe v Wade preventing third-trimester abortion except when there are grave or life-threatening health consequences for the mother.

In other words, no needless third-trimester abortions or post birth abortion on demand.