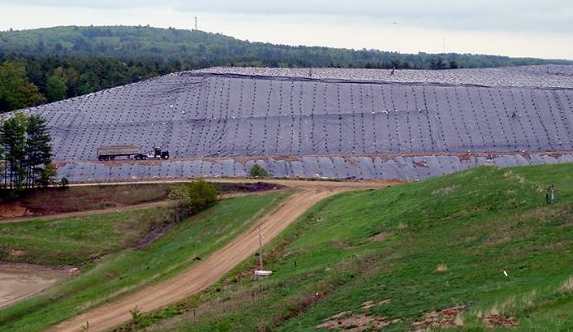 Runoff, or leachate, from the landfill will no longer by accepted at a Massachusetts facility. (Courtesy photo/Sanborn Head)

ROCHESTER - Wastewater taken from Turnkey Landfill in 2018 tested at unhealthful levels of per- and polyfluoroalkyl substances, known commonly as PFAS, according to published reports.

An article this week in The Boston Globe noted that the wastewater - or leachate - was sent to the Lowell (Mass.) Regional Wastewater Utility and an unnamed Maine facility.

Turnkey is owned by Waste Management, which also services Rochester with its residential trash pickup.

PFAS are part of a family of compounds including Teflon. They are manmade and commonly referred to the "forever chemical" because they don't break down. They are found not only in pots and pans but also in firefighting foam and many other substances.

Wells at Pease Tradeport are regularly tested for PFAS since the firefighting foam was used by the Air Force in the 1970s at the former Pease Air Force Base.

Niney-nine percent of Americans are estimated to have some PFAS chemicals.

There are studies that show they are linked to cancer, reproductive and immune system harm and other diseases.

On Thursday, a day after the Globe story was published, Lowell officials suspended their agreement with Waste Management to accept runoff from Turnkey.

The facility had been treating wastewater from Turnkey on a daily basis before discharging it into the Merrimack River, a local drinking water supply.

The Globe report said Sep. 2018 tests at the Lowell water treatment facility showed levels as high as 9,700 ppt for some types of PFAS, more than 100 times above the federal health advisory level for drinking water.

The landfill comprises some 1,200 acres off Rochester Neck Road. It receives trash from around the Seacoast and out of state.

It's not clear whether Waste Management has alternative sites to send its leachate now that the Lowell facility has suspended its contract.

In May 2016 the EPA released revised lifetime exposure levels for PFOA and PFOS from drinking water, reducing the health advisory level to 70 parts per trillion (ppt) for both PFOA and PFOS.

Waste Management officials were not immediately available for comment today.