Turns out kids like the nightlife, too: MOOSE-ies have a ball at twilight walk 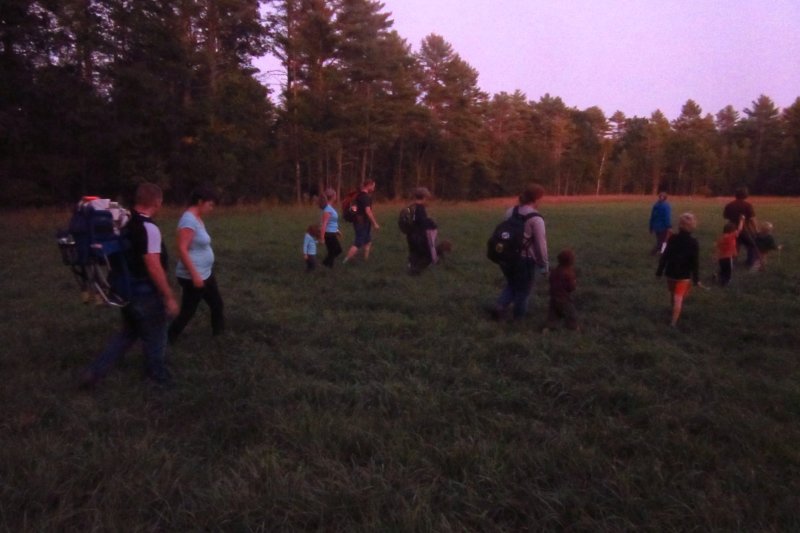 Parents and children fan out in a welcoming meadow during a recent New Moon Walk in Milton Mills. (Amy Gardner photo)

MILTON MILLS - What can you do outside in the dark? A lot, it turns out, as discovered by a dozen parents and children who joined Moose Mountains Regional Greenways for a Family New Moon Walk on a warm September evening at Branch Hill Farm in Milton Mills.

The outing was part of MMRG's 'MOOSE-ies for Families' program of six nature-related activities per year, designed for families to have fun outdoors together and to encourage a new generation of conservationists.

As twilight fell, families walked along a woods road through the Branch Hill Farm forest. One child picked up a pine cone, which became an opportunity to identify and learn about pine trees. When the forest transitioned from softwoods to deciduous, trip co-leader Tom Gardner pointed out the differences between leafy trees and trees with needles. Other senses came into sharper focus as twilight deepened. When co-leader Kari Lygren pointed out the soft moss under their feet, one little girl opted for the full sensory experience and lay down in it. Further along, where the path opened up to a field, everyone spontaneously grew quiet and listened.

The destination was a secluded meadow enclosed by woods, perfect for stargazing while lying on blankets or for frolicking around on the grass. Kids had a great time chasing and capturing crickets while adults enjoyed seeing the stars gradually appear in the darkening sky and learning to identify various constellations. Everyone was interested in trying the red flashlights (red cellophane taped over the light bulb end), which made it easier for eyes to adapt to the dark.

Earlier, Gardner had discussed how our eyesight is based on rods and cones and why red and white light has different effects. He gave examples of animals with different types of sight: nocturnal animals, such as owls, bats and raccoons, that come out and hunt only at night; crepuscular animals such as deer, active at dawn and dusk; and the many diurnal animals that humans are familiar with because we're all out and about during daylight hours. By the time families made the walk back from the field to their cars, night had fallen and children noticed they could see better when the lights stayed off or only red lights were used.

Reflecting on the evening, Lygren reported, "We threw out most of the structured activities we had planned, because kids were having so much fun playing in the field and being outside in the dark. That's the point after all, for us to enjoy and value what nature has to offer us!"