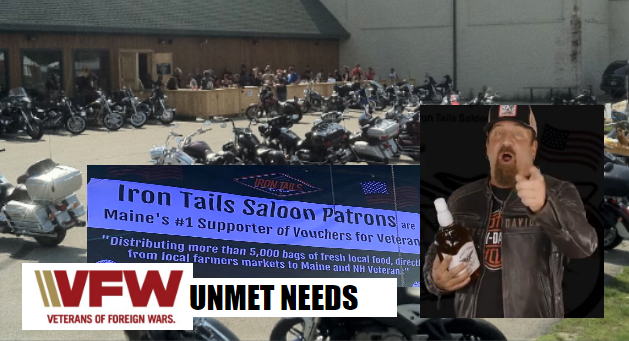 ACTON, Maine - The confluence of good times and good causes will combine on Sunday at Iron Tails Saloon for an epic afternoon of giving to help those who help us stay free.
Two charities will benefit from the event, which will include an appearance by Jesse James Dupree, media entrepreneur and frontman for southern rock band Jackyl who is also in the liquor business and is expected to auction off a couple of signed bottles of his own Jesse James Bourbon.
Two group motorcycle rides will precede the event at Iron Tails, one of them from Harley Davidson of Rochester in which Dupree will ride.
Registration for the Dupree ride runs from 9-11 a.m. and costs $25 to benefit the New Hampshire VFW Unmet Needs program, which provides grants to active duty service members, veterans and their immediate families to assist with basic life needs.
Kickstands up at noon and ride ends at Iron Tails on Route 109 across from the Acton Fairgrounds.
The other ride is for Vouchers for Veterans, a charity near and dear to Iron Tails patrons, who last year donated some $42,000 to the nonprofit.
"They've been fabulous," said Jeanne Grover, president of Vouchers for Veterans.
Grover recently announced that this September they will be giving out vouchers at nine different farmers markets a week. Veterans can pick up vouchers once a week at their choice of Kennebunk or Sanford in Maine, and Portsmouth, Wolfeboro, Exeter, Barnstead, Littleton, Rochester and Dover in New Hampshire.
And next January they we will be at a different Farmers market, giving out vouchers each week through April.
The 3rd Annual Ride for Veterans, which benefits the voucher program, will hold registrations beginning at 10 a.m., at Iron Tails with donations accepted to go on the ride. Kickstands up at 11:30 a.m. and ride begins and ends at Iron Tails.
The afternoon entertainment will be provided by the band American Ride.
There will also be plenty of raffle prizes, auctions and a 50-50 raffle, and of course, food and drink.
Iron Tails owner Gregg Martinez said last week that he is blessed to have patrons who are so generous in their support of veterans.