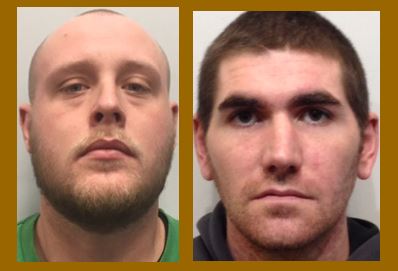 Glen Lemelin, 25, and Robert Laughton, 28, both face a slew of charges in connection with the burglaries, which occurred at the Care Pharmacy on South Main, the Wakefield Street Rite Aid and the Hannaford's on North Main, all within a couple of hours of each other.

Lemelin is alleged to have been the individual who entered or tried to enter each of the stores, while Laughton is charged as an accomplice.

The bizarre string of robberies all occurred as a powerful blizzard began to bear down on the area.

The first incident at Care Pharmacy occurred around 2:50 p.m. when witnesses said a lone male entered the store, and went to the pharmacy demanding narcotic drugs. The suspect was not able to obtain any drugs and fled the store. No weapon was shown, and no one was injured.

A K-9 track was performed, but it appeared the suspect left in a vehicle.

Then around 3:35 p.m. police responded to a report of a possible attempted burgary at the Rite Aid at 190 Wakefield.

The caller said that a male fitting the same description attempted to go into that store, however, was not able to and fled the area.

Shortly afterward, police received a call from the Hannaford at 290 North Main Street reporting a robbery in progress, stating the a male fitting that same description was now at the pharmacy there demanding narcotic drugs. The male was again unable to obtain any drugs and fled the store. No weapon was shown and no one was injured.

As a result of a brief investigation, Rochester Police, with the help of Barrington Police, arrested Lemelin and Laughton.

Lemelin was charged with one count of robbery and two counts of attempted theft, all felonies.

Laughton, who is currently on probation for robbery, was charged with three counts of conspiracy to commit, all felonies.