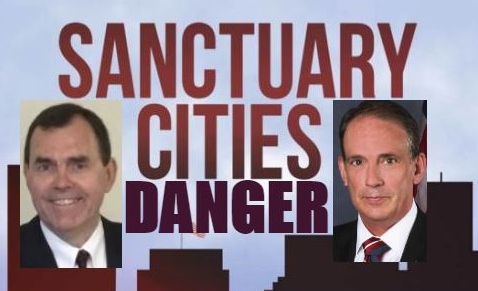 The U.S. Attorneys for the Districts of both Maine and New Hampshire issued statements condemning Sanctuary Cities following Attorney General William Barr's speech on Monday regarding the dangers that sanctuary cities and sanctuary policies pose to the general public.

"The result is that federal law enforcement officers are hampered in their efforts to locate, arrest, and remove people who are in the United States illegally," Murray added. "This may include individuals who are actively engaged in criminal conduct."

Barr's remarks resonate in New Hampshire where the opioid crisis has been fueled by foreign drug cartels who exploit our citizens for the sake of making a profit, Murray said.

"Their lethal drugs reach our state through a network of traffickers who often employ criminal aliens as dealers to sell drugs in our communities," he noted in his statement. "To shield themselves from arrest, criminal aliens often reside outside of our state, sometimes living in sanctuary cities where they feel safe."

"Illegal aliens who commit crimes in this country and end up in state or local custody should not be able to avoid removal or other immigration consequences," Frank said in his statement. "Releasing criminal aliens in the face of immigration detainers imperils the public. Illegal alien criminals who have been released after law enforcement agencies have failed to honor detainers have gone on to commit additional crimes, including violent felonies."

In addition, the two U.S. attorneys agreed that when state and local jurisdictions release criminal illegal aliens, immigration officials must locate and arrest them in the community rather than in the secure and controlled environment of a jail or prison, which is far less dangerous.

While Portland is seen as a haven for illegal immigrants, law enforcement agencies do share knowledge when illegals are released from custody.

City welfare officials, however, do not request proof of citizenship or immigration status when servicing anyone in need, making them a favorite home to those seeking refuge.