Undaunted, unflinching, Vicki Cilley fights the good fight in her battle with cancer 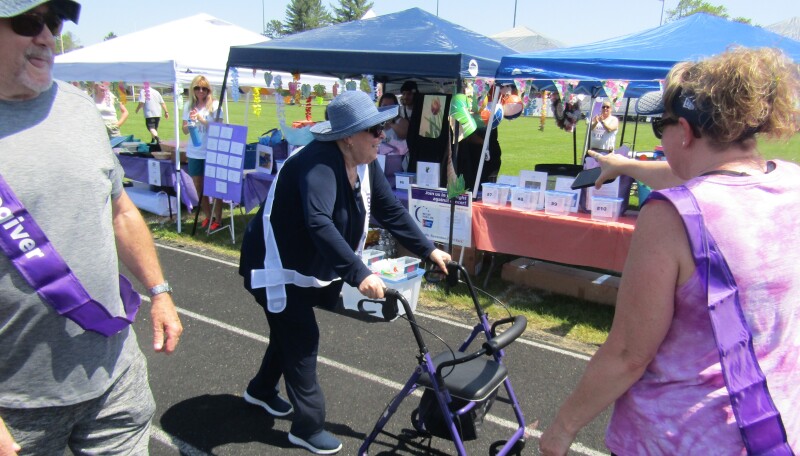 ROCHESTER - The message of Rochester's Relay for Life on Saturday was: Celebrate, remember and fight back, and fighting back is exactly what Vicki Cilley of Dover is doing.

As scores of cancer survivors walked the first lap of the 12-hour relay, trailing behind was Cilley using a walker to do the entire lap on her own, surrounded by family and friends.
Cilley, 70, was diagnosed with breast cancer in September and she said it's been a long, tough fight, but she's not giving up.

"I had a heavy dose of chemo which was very severe," she said as onlookers cheered and applauded her as she walked past.
Cilley, who formerly worked at the GE plant in Somersworth, grew up in Dover and went to Dover High.
She said after the chemo she went on to radiation, and now she's doing a lot of physical therapy.
Several hundred spirited survivors and their loved ones attended the event amid sweltering heat and humidity.
Event co-chair Sarah Scheffer thanked the large crowd and all of the sponsors who helped

make the event such a success.
In addition to the 12-hour relay, there were two silent auctions, raffles, a special lunch for survivors and many vendor booths.
Entertainment was provided by the acoustic Cameron Driver Project, Dance the Line, Studio 109, Taylor Marie, Sole City Dance, Rob and Jody, and Kowboys Karaoke.
There were also several themed laps to break up the day, like Disco Fever and Heehaw Hoedown laps along with other fun activities and games.
At dusk the event moved into a more reflective phase with Hugo Bolin field lined with glowing luminary bags and participants walking in quiet reflection to honor and remember those who have lost their battles to cancer.
As for Cilley, she said she hasn't reached the time when doctors take a full scan to see if she's cancer free.
"I hope I'll be clear," she said. "That's the point (with cancer). You never know how much time you got left."
We know you'll be clear, Vicki. God bless you.