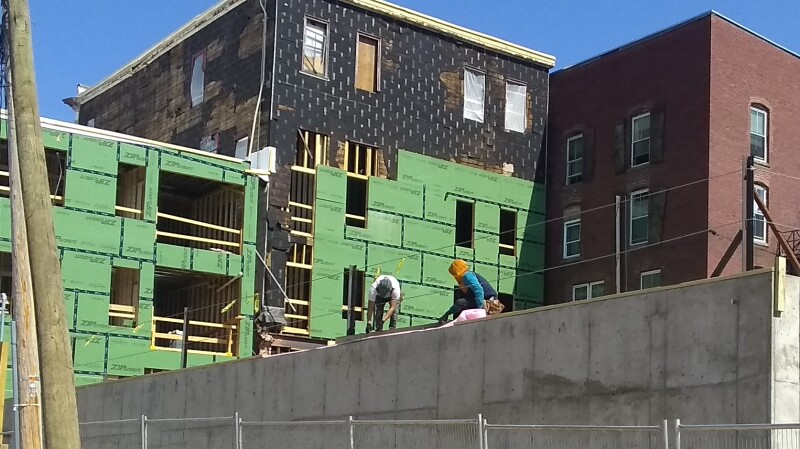 Construction workers atop what will be the first floor garage at the Scenie Salinger block in downtown Rochester earlier this month. (Rochester Voice photos)

ROCHESTER - Two major construction projects currently under way in the downtown have been impacted by pandemic-driven labor and supply chain issues, but Rochester's economic development director said on Friday both are still plugging away and making progress toward completion.

Workers can be seen most days working on the Scenic Salinger Block project, both in the front roughing out commercial spaces along North Main and in the back where they have completed the ground floor of a parking garage that will provide 14

spaces for renters of the 52 one- and two-bedroom apartments being planned by the developer Chinburg Properties of Newmarket.

"They've framed out the commercial units and have begun working on the second-floor apartments," said Mike Scala, director of Economic Development.

The original completion date for the Scenic Salinger had been projected for this fall, but with the construction delays that have occurred Scala thinks a new tentative date would be more like January or February.

Meanwhile, the 1830 circa Ainslie building, former home of Ainslie's Drug Store, is about a month and a half into a

Two other ambitious projects that could provide economic stimulus for the downtown include the Hartigan building at the corner of Union and North Main streets and the long-shuttered Rochester Bank and Trust building at 22 South Main, just south of the Greater Rochester Chamber of Commerce and the Ainslie building.

Those two projects are both awaiting approval by federal officials on their historic building designation status before moving forward, Scala said..