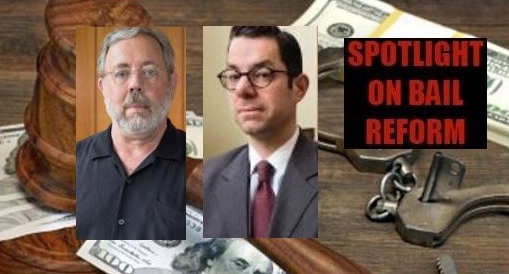 Editor's note: This is another in an occasional series of reports produced by The Rochester Voice concerning the issues of New Hampshire's recent bail reform legislation.

They say the definition of insanity is when you do the same thing over and over again and expect a different outcome.

Velardi, who has been outspoken in his criticism of the legislation, told The Rochester Voice that under bail reform suspects released on PR, or personal recognizance bail, are reoffending or not showing up for court appearances and being immediately rebailed on $0 PR bail after being picked up on another charge or bench warrant.

"Every time you are put on bail, you're given conditions," Velardi fumed. "The conditions are that you not reoffend, be on good behavior and show up for hearings. And when they don't do that the person is in indirect criminal contempt."

But Velardi said judges in far too many cases simply release them again on $0 PR with the same conditions.

"What confounding to us in law enforcement is they aren't enforcing their own bail orders," Velardi said. "Why would we do the same conditions? That's what the public is getting outraged about.

"Each time they (offenders) come in, it's a clean slate."

Scherr, however, disputes Velardi's claims that suspects are failing to appear for court hearings and reoffending while out on bail in larger numbers.

"Not a single county attorney would agree with (Velardi's) claims," Scherr added.

One indicator that may give some credence to Velardi's point is that Strafford County Community Corrections, the county department that deals with pretrial release, has seen its case numbers increase by 25 percent since last year.

Both Velardi and Scherr agree on the overriding intent of bail reform, which is to take cash out of the equation when it comes to remaining free while awaiting trial.

But some of the verbiage submitted in April tweaks to the bail reform package is leading to more and more frustration on the front lines, Rochester Police Capt. Todd Pinkham said recently.

Pinkham said one of the unintended consequences of bail reform may be that more officers opt to give an arrestee a hand summons rather than bother to go through the arrest process only to have the judge move for immediately release with $0 bail.

"Bail reform does go into their thinking," said Pinkham, who noted that officers have the option to arrest or hand summons for Class B misdemeanors.

Verbiage in the April tweaks of Senate Bill-314) seem to support the current consensus in the courts that if it's not a felony, Class A misdemeanor or DWI, the chances for accountability is somewhere between slim and none.

The bill states in part, "If the court determines by a preponderance of the evidence that a person has failed to appear on any previous matter charged as a felony, class A misdemeanor, or driving or operating while impaired, or a reasonably equivalent offense in an out-of-state jurisdiction, 3 or more times within the past 5 years, there shall be a rebuttable presumption that release will not reasonably assure the appearance of the person as required."

So three or more times in five years is the benchmark for accountability, some would say; folks in law enforcement would say that's a long time to be able to rack up a slew of minor crimes with little consequence with regard to bail.

But Scherr says it's up to the prosecutors to make a compelling case for no bail, not the legislation.

Tweaking the bill may have weakened it

Among the tweaks made in the language of the bill in April was removing the list of criteria that a judge could consider in determining whether a suspect could be a danger to themselves or others.

Those criteria included homelessness, drug use and other risk factors, but the language was changed to "all relevant factors bearing on whether the release will endanger the safety of that person or the public."

Velardi said he specifically urged that the specific criteria of "reoffending while out on bail" be added to the toolbox judges could use in ordering no bail, but he said he was told there would be "no more changes made to the bill," he said on Monday.

Velardi said another unintended consequence of the bill is that instead of just releasing those who fail to appear on another $0 bail, police and prosecutors are filing charges of bail jumping. Velardi said both courtrooms at Strafford County Courthouse now probably spend two hours a week on bail jumping cases, which is costly and cumbersome.

For Velardi, the overarching concern is public safety - that someone who shouldn't be back on the street will be - and will commit an act of violence.

"There are people who don't want to look at the real issues and deal with them," he said of legislators, Scherr and other stakeholders. "This was a law passed with a study committee, a committee that would see the law unfold over a period of time. And law enforcement is concerned that this law is not going as planned. These are concerns being brought every day and they are being ignored."

The study committee won't meet again to draft any changes till November, and Velardi, the lone county attorney to sit on the committee, would like the changes made sooner rather than later.

He added that when some of these individuals get bailed out over and over again with no accountability, bad things could happen.

"When someone gets hurt, and we're holding our breath that this doesn't happen, but this is where things are headed," he said.