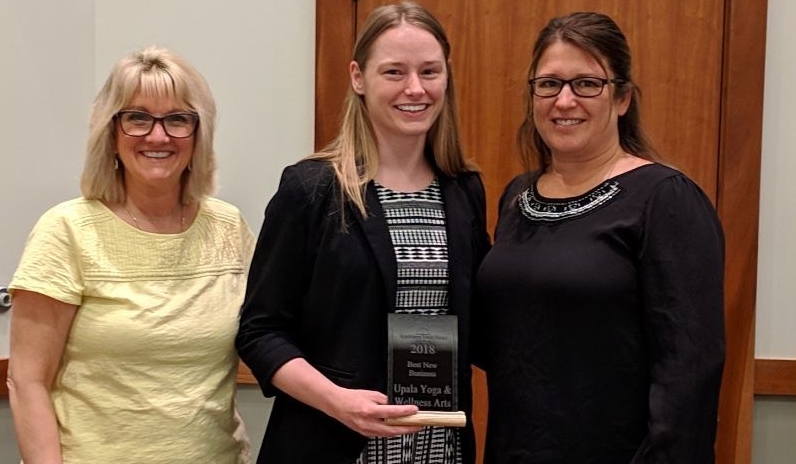 Owner Heather Day of Upala Yoga and Wellness holds her plaque recognizing her practice as Main Street's Best New Business. With Day are Bonnie Amirault of Main Street Board of Directors and Jenn Marsh, board president. (Courtesy photo)

Executive Director Angela Mills welcomed guests and volunteers to the meeting then introduced the event underwriter, Dr. Jocelyn Caple, President and CEO of Frisbie Memorial Hospital. Dr. Caple provided a review of Frisbie's recent history and current status before thanking attendees for their dedication to downtown and to Rochester as a whole.

Mills echoed that sentiment while stating, "No one entity can effectively maintain a downtown. Sustainability takes the entire community working together." She stressed the importance of the volunteers who make Rochester Main Street and the community successful.

Bonnie Amirault, vice president of the Board of Directors, spoke to the organization's financial status throughout 2018 and the organization's financial stability in 2018 and already in 2019. She noted 2018 ended with positive revenues, and that 2019 has already seen higher-than-expected net profits. "We are focusing on ways to improve our program so we can direct efforts and dollars on the economic health of downtown," said Amirault.

Jennifer Marsh, President of the Board of Directors, continued the theme of Main Street reinvesting efforts and focus on downtown rejuvenation. She noted some movement in businesses and property sales downtown, explaining that things are happening to move toward improvement, although some of those things are behind-the-scenes and therefore not as publicly visible as other activities.

Attendees heard from Joshua Guptel, owner of downtown business Curlies Comedy Club. He explained how and why he chose to locate in downtown Rochester and stressed the concept of "Why Not Rochester." Guptel stated he believes in Rochester and admires the collaboration that business owners have with each other. He said the city as an entity may seem intimidating to someone just getting going, but they are always a phone call or email away and are willing to help.

The event then shifted to the 2018 Downtown Awards, what Mills called "her favorite part of the event, giving credit where it's due and recognizing the great people and businesses of Rochester." She noted the awards were designed and constructed by students of Jason Eberl's Engineering Class at Spaulding High School.

The first award issued was the "2018 Tyler J. Bisson Youth Volunteer of the Year Award," which was presented to Spaulding High School's Interact Club. "These are the kind of teens who give us hope for the future," Mills stated.

The next award was for "Best New Sign" and was given to Town Square Barber who said her children gave her the sign as a gift, so they will be thrilled.

The "2018 Main Street Partner of the Year Award" was given to the Greater Rochester Chamber of Commerce, a long-time Main Street advocate, for their "establishing partnerships for a common goal of community betterment."

Recipient of the "2018 Stewardship Award" was presented to Anthony Ejarque as Director of the Rochester Opera House. Mills noted, "He exemplifies 'downtown enhancement' and 'stewardship' in Rochester" for his efforts in developing new events, assistance in beautifying buildings in the district, and being an ongoing advocate for the downtown and for the arts.

The "2018 Volunteer of the Year" award was given to Jeffrey Meulenbroek of Studley's Flower Garden. Mills noted he was a great asset to the Main Street program and to her as a new Director in 2018 and that he "left a mark on downtown- both literally and figuratively- by supporting and improving the overall aesthetic, from lending advice to donating dirt."

Mills was happy to provide the "2018 Board Member of the Year Award" to Amirault for her efforts in securing financial sponsorships for the program while "oozing enthusiasm and offering genuine support."

Noting that Main Street "hit the jackpot" with the "2018 Best New Business Award" winner, Upala Yoga and Wellness. Mills commented on the business's unwavering willingness to collaborate with other businesses to strengthen the entire district.

The awards wrapped up with the final award for "2018 Business of the Year" being awarded to Jetpack Comics for "embodying the spirit of 'Downtown' while steadily supporting the community and the businesses and organizations within it."