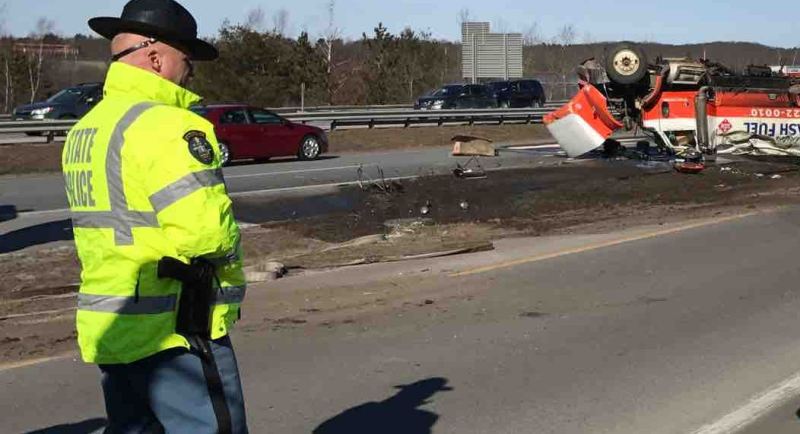 Scene of todays oil truck rollover on I-295. (Courtesy photo)

SOUTH PORTLAND - State Police say a medical issue likely caused the driver of a fuel truck to lose control of the vehicle today as it overturned along I-295.

The accident occurred soon after the truck had left the South Portland fuel depot, and its entire load of 2,900 gallons of home heating spilled onto the roadway.

Traffic has been reduced to one lane for both north and southbound traffic and that will continue for the rest of the afternoon, causing backups in both directions, safety officials said.

The driver of the truck, 58-year-old Dale Brown of Topsham, is being treated at Maine Medical for a head injury from the crash and his medical issue, suspected to be heart related. Both conditions are believed to be nonlife-threatening, according to a press release from Dept. of Safety Stephen McCausland.

The wreckage of the fuel truck is now being removed, but cleanup efforts overseen by the Maine Department of Environmental Protection will continue for the rest of the afternoon as the oil spilled onto the road, went into the median and flowed down into a drain pipe and the Fore River.

Sand was brought to the scene by the Maine Department of Transportation to assist in the cleanup efforts.

Troopers said Brown lost control of the truck, and it struck a guardrail and cement abutment before overturning. The driver is the owner of the truck whose business is Dale's Cash Fuel in Richmond.