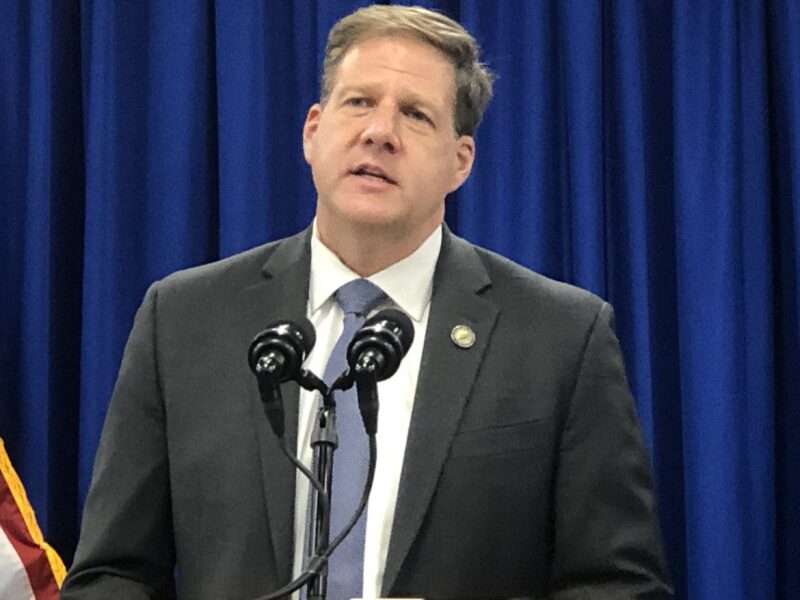 CONCORD - With a record 323 new COVID-19 infections Thursday, three new deaths, outbreaks at three nursing homes, and possible exposure at the polls in at least four different locations, the state announced it would not be able to do contact tracing every case now.

The new cases include 40 minors and 56 from Strafford County. Local numbers were not immediately available.

Other areas of concerns include a 2.6 percent positivity rate and current hospitalizations, which now stand at 64, up almost four times what they were a month ago.

At Gov. Chris Sununu's weekly pandemic briefing, he also acknowledged that the virus is now widespread in all the state's counties and discouraged people from traveling and gathering in large groups for Thanksgiving.

He also said that he believes Joe Biden is the President-elect, distancing himself from other Republicans in Washington and President Donald Trump, whom he supported, who has not conceded an election held more than a week ago.

One of the single biggest issues facing the state and the country, Sununu said, is managing the health-care workforce and getting enough nursing staff where they are needed, a problem that is currently placing the Coos County Nursing Hospital in a dire situation with a lack of staff.

The state is seeing more testing but it has gone from having an average of under 1 percent positive for its tests a month ago to now 2.6 percent, and it has seen hospitalizations increase to now 64 people.

Currently, the state has a record of 2,538 active cases.

The three new deaths were all residents of long-term care facilities, bringing the total number of lives lost to this virus in New Hampshire to 495, said Dr. Benjamin Chan, state epidemiologist.

And he said those numbers increase the chance of transmission in schools, offices, and among the public.

"We know how to control the spread of this virus. We have seen our community mitigation efforts pay off and work," in the first wave, "but controlling the spread of COVID-19 continues to be a collaborative and collective effort."

"Given high rates, we want to announce...to introduce the change that public health will no longer be conducting contact tracing investigations for each and every person diagnosed with COVID-19," he said, but prioritizing its investigations to target the most at risk.

Chan said the state would also be working with and empowering local partners - like schools, nursing homes, businesses - to help with outreach and doing a bit of contact tracing of their own to help track the virus. This means that one's health care provider, in calling to tell someone that they have the virus, will also be enlisted to ask questions about contacts.

"We want to stress that if people do get called by the Department of Public Health, please pick up the phone and work with our investigators," Chan said and therefore help to continue efforts to slow the spread of the virus, but not everyone will be getting a call going forward.

Chan said there will be more posting of information on its website and more outreach to health-care providers.

The state did close out one cluster investigation at Bedford Hills Nursing Center on Nov. 9.

Shibinette said all counties are currently in phase one for public visitation at long-term care facilities, meaning no visitors due to the level of community transmission in each county.

Additionally, there have been four instances of people who went to polling locations on election day, stood in line and could not do social distance, and have tested positive.

Shibinette said frankly anybody who stood in line at a polling place in New Hampshire last Tuesday should be monitoring themselves for symptoms of the virus, given the high levels of community transmission now occurring.

Youth Hockey
Sununu announced a seven-state agreement to suspend interstate youth hockey competitions until the end of the year at least. It does not impact college or professional hockey.

"The (hockey) season is still definitely on," Sununu said, but no interstate tournaments for youth hockey.

He also announced a change in guidance for those traveling outside of New England for leisure or non-essential travel, allowing for people who return to the state to either quarantine for 14 days before going out or test out with a negative COVID-19 test and seven days after returning to New Hampshire.

Currently, all have to adhere to a 14-day quarantine.

"We really do encourage everyone to be extremely caution," about traveling for Thanksgiving and being inside in even small groups with friends and family. Sununu called those "spreaders" of the virus. He said the guidance brings the state more in line with other states.

Adequate nursing staff is a hot button issue, Sununu said, with many in that career facing COVID-19 illness or have the need to stay away because of exposure. It has been exacerbated by the fact that the state was not able to allow schooling, particularly for LNAs to continue during the pandemic.

While the state has hired outside emergency staffing for nursing homes in crisis, services are limited in rural areas, Shibinette conceded.

"Virtually everyone is going through the same problem at the same time," Sununu said, encouraging those with ideas to come forward.

As bad as the situation, Sununu said he expects it to get worse before it gets better and there may be days when instead of seeing 300 new cases a day we see 1,000.

He did acknowledge there is good news on the vaccine front and said he would work to develop some information next week on how the state plans to roll out vaccinations if and when they become available.