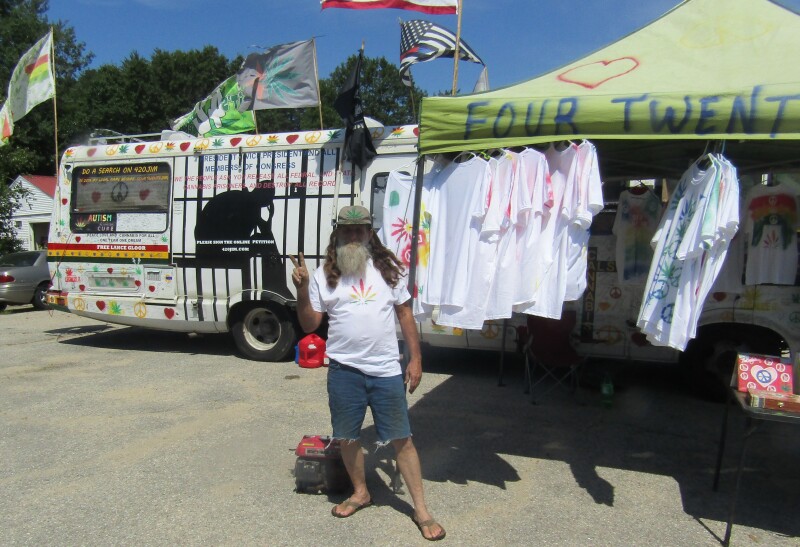 ROCHESTER - Despite some scurrilous talk on social media that he is actually selling marijuana, a man crisscrossing the country to promote the federal legalization of cannabis told The Rochester Voice on Saturday that he is having a wonderful visit to New Hampshire and Maine, the 37th and 38th states he has traveled through in his motorhome known as the CannaBus.
420Jim, his real name, is seeking petition signatures that call for the release of all those serving time on cannabis crimes and also expunging their criminal records.
420Jim has been spreading the word across the country for eight years now, and will be spending one more day in Rochester at the JG Flea Market at 184 Milton Road before heading south to Georgia.
420Jim says cannabis is a gift given by the Lord that has the power to help those suffering from autism, Parkinson's and epilepsy, but earlier this week there was a lot of Facebook chatter that he was actually selling marijuana, which is false and irked him greatly, he told The Voice.
On Thursday afternoon he gave tours of his motorhome that was parked on Route 202 near the intersection of Depot Road in Lebanon, Maine.
His bus has also been seen recently parked on Portland Street in Rochester spreading the same message.
Anyone can tag his CannaBus for any donation and can go to 420Jim.com and sign the petition.
His CannaBus does sell T-shirts, ceramic art and other cannabis-themed knickknacks.