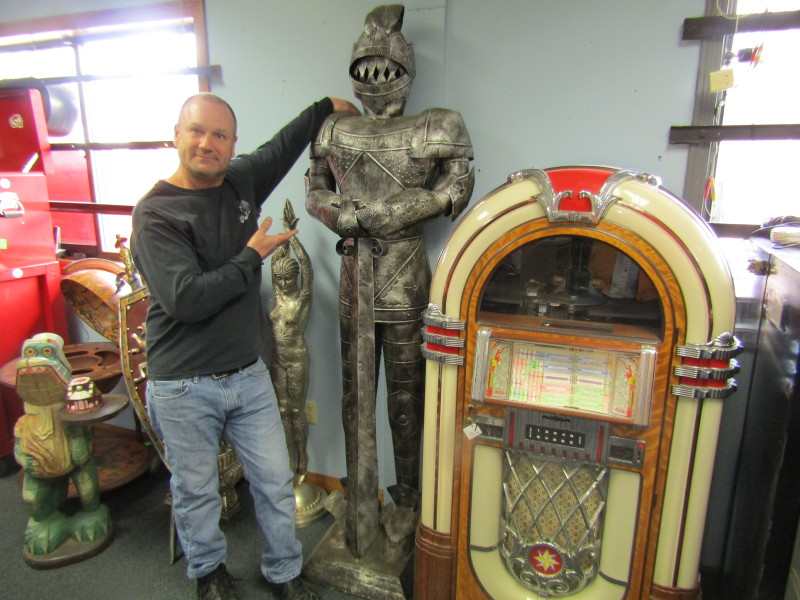 Tracey Frisbee stands next to his knight in shining armor, yours for a mere $300, (Lebanon Voice photos)

ROCHESTER - When you think of pawn shop window shopping you might envision rows of used electronics, cameras and jewelry, but at Quick Cash on Columbus Avenue there's also a bit of the quirky, too.

How bout a leather leopard or a stuffed coyote for the hunter in the household? Or for the ladies, a knight in shining armor?

And for the man about town, maybe an antique leg lamp like the one in everyone's yuletide fav movie. A Christmas Story. Oh, sorry, that one sold quickly, says Quick Cash co-owner Tracey Frisbee of Rochester.

"We've also had a rickshaw," he adds, looking around at all the assorted items in the store, Rochester's largest and oldest pawn shop, which was started by his parents and partners, George and Diane, 27 years ago.

Of course, anyone who's ever passed by the shop has had a gander at the astronaut atop the roof, but it wasn't always there, Frisbee said on Friday.

That's not to say we won't listen to an offer, he quips.

In fact, that's what they do all day at a pawn shop. Listen to offers and make offers.

One is an outright buy, where someone comes in with something to sell. "We make an offer based on the expected retail sale price," Frisbee said, adding they also factor in how long it will likely take to sell.

The other is by collateral loan, which is when someone comes in with an item they may want to keep. Then Frisbee will, again, make an offer based on the estimated retail sale price. Then the person has 31 days to return with the money - plus interest - to get back the item.

An outright sale will bring a slightly higher price, Frisbee says, as more turnaround time is required before the item can be sold.

So what's the thing they least like to see coming through the door? "Watches, bowling balls, skis, we frown on those," he says.

And the thing they most like? "Gold, silver bullion, we get excited when we see that," he adds.

Of course, the old cliché is that bad guys use pawn shops to fence stolen items, but in fact, at least nowadays, that couldn't be further from the truth, Frisbee notes.

"What I notice is with Facebook yard sales, Ebay, Craigslist and Let Go, thieves are using that cause they don't have to sign," he said. "We take their ID and they have to sign saying they are the owner. We want to discourage someone trying to fence something."

In fact, he said they frequently get lists of stolen stuff from police, even the owners, themselves, and do all they can to help.

"The amount of stolen stuff actually found in pawn shops has gone way down," he added.

And while pawns shops are like any business, the human element and emotion inherent in the job can be exhilarating one moment, heart wrenching the next, he notes.

"People often come in here on their last hope to get some money after they haven't been able to get help from family or friends and they'll bring an item that I don't want and they're trying to buy diapers or feed their children," he said. "It's sad.

"But on the good side, I've also helped people put oil in their furnace or buy food. We provide a service, but we're a business, too."