'We care about humans:' Car rally at county jail demands release of all ICE detainees 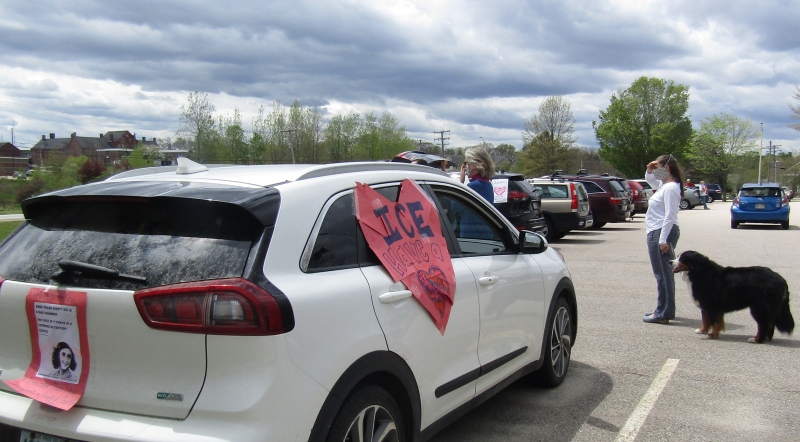 People from around the state gathered at the Strafford County Courthouse for a rolling rally past the nearby jail on Sunday. (Rochester Voice photos)

DOVER - About 60 cars from all over the state participated in an afternoon rolling rally on Sunday pushing for all ICE detainees held at the Strafford County House of Correction to be released immediately due to the dangers of COVID-19.

The rally came a day after the jail announced its first coronavirus case involving an ICE detainee and two days after they announced a jail employee who tested positive. They are the jail's first cases.

The ICE detainee had arrived while symptomatic and was immediately isolated in a negative-pressure cell, while the employee, who had no contact with inmates, was sent home to isolate.

Tess George, who helped organize the rolling rally, said the ICE detainees have to be released now.

"Look, the more people that are in there, the less safe it is," she said. "The guards live in the community, this isn't safe for anybody."

Jail Supt. Chris Brackett told The Rochester Voice last week that the jail is safe, that they allow fewer people into the common area in staggered shifts and that both guards and inmates are observing social distancing guidelines.

It's been noted in several news accounts and by those at the car rally that the ICE inmates are all there on civil detainers with no criminal complaint, but we were not immediately able to verify that fact through jail personnel.

The state ACLU claimed earlier this month that not immediately releasing all ICE detainees from Strafford County Jail put inmates, staff and the broader community "at great risk of death or grave injury," due to COVID-19.

George said they started the rallies six weeks ago with about 35 cars and they have growing each week.

"We're showing solidarity with the inmates; they expect us to keep doing this," she said.

Bailey Cosgrove of Nashua, who was taking part in her first rolling rally against ICE, said she was there because, "We care about humans. "

Her friend, Faith Mandravelis of Manchester, who was at her first, said people like her have to step in when "the government doesn't have people's best interest in mind."

"We have to create in community what government is supposed to be but isn't," she said.