We should shelve Drag Queen Story Hour for toddlers 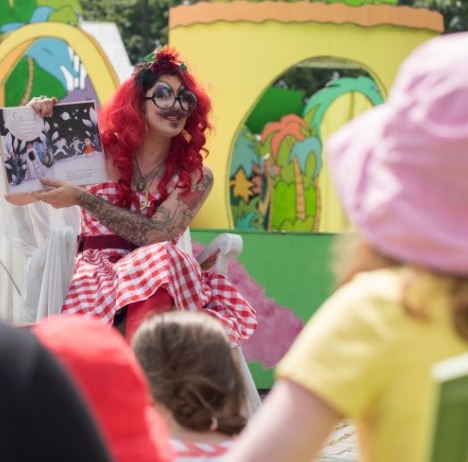 A recent Drag Queen Story Hour held at Prescott Park in Portsmouth promised 2-8 year olds a morning of stories, music, and creativity with Bunny Wonderland. It was sponsored by the Prescott Park Arts Festival. (Courtesy photo)

If our "world gone crazy" was tried in court, the prosecutor would easily get a guilty verdict with the jury stacked against

traditional morals as it is. Criminals are victims while police actions are called, "police brutality"; and we are to trust LBGTQ Drag Queens to read to 3 to 5 year old children at NH Libraries.

Evidence that local police are necessary to keep the peace is challenged by Facebook allowing slanderous propaganda to pollute the air waves with "hate speech" that violates their own definition of it. Nightly TV news follows in lockstep and monopolistic print media falls in line. All together the Orwellian Ministry of truth rules what is good, as evil and evil, as good. The dominating force of opinion molders brings us the verdict, police are the bad guys. But we can trust the libraries, they have the Ministry of Truth stamp of approval.

Do you care that under this hierarchy of approval of what is good for children that is paid for by our taxes that pay salaries of the bureaucrats at the American Library Association, ignores what you think? The Drag Queen Story Hour (DQSH) is now invading NH big time.

"The LBGTQI+ wants to recruit your children and grandchildren, while parents and grandparents like my wife and I, are smeared with emotionalized trigger words. Old fashion ideas of Parental control were challenged at a DQSH at the Nashua Library recently and another event played at the Brookline Library on, Aug. 29. True public opinion has been walked over by the Orwellian Ministry of Truth for many years. But the jury is still out. It's coming to your town. Your testimony is needed. The buck stops with you.