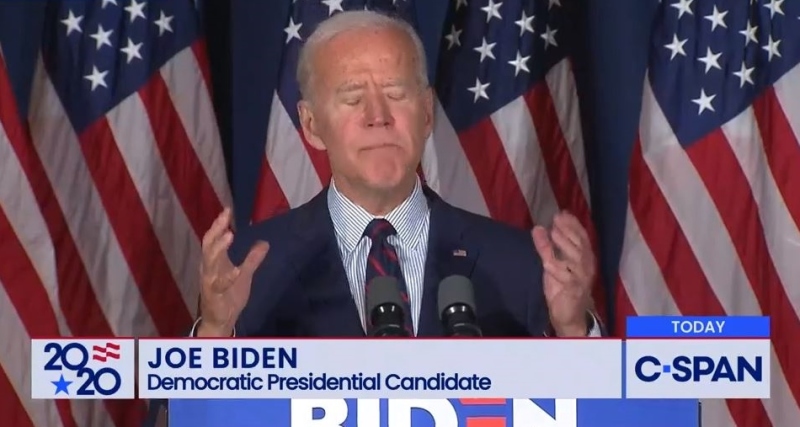 First there was "Where in the World is Carmen Sandiego."

Then there was the famed "Today Show" series "Where in the World is Matt Lauer."

(Btw, is that series still on?)

And now there's a new one: Where in the World is Joe Biden?

We don't know where he'll pop up next.

In fact, we didn't even know he popped up in the Lilac City on Wednesday until he'd already left.

That's known as egg on your face if you're a journalist, but we took it in stride. Most other local media outlets were caught flat-footed as well.

But being a dutiful journalist, we'll follow up with the Biden camp next week to see if we can get on the mailing list on any upcoming trips to the Northern Seacoast.

In the meantime we watched the 25-minute speech at the Governor's Inn on C-Span and found that the former vice president gave a pretty darned coherent speech, with only a couple of gaffes.

One such faux pas was when after a torrent of accusations crying for the impeachment of President Trump, he blurted out "We can't not let him get away with it!"

Saints preserve us from double negatives.

The other was when he referred to a 1962 JFK speech about going to the moon when President Kennedy said the lunar challenge "is one we are unwilling to postpone."

Biden invoked the speech incorrectly quoting the former president as saying, "I'm willing to postpone the work that has to be done."

After visits to Rochester and Manchester the same day, the former vice president's strategy is pretty clear: similar to Hillary Clinton's, he'll eschew large-venue events, not only because he probably couldn't fill them, but also because he does better in the friendly confines of a small hall filled with friendly Dems.

On Wednesday he bragged about his accumulation of important legislation over the years, but skipped talking about the 1994 crime bill he authored that led to mass incarceration of minorities in the 1990s.

Much of the unfairness of that bill was overturned with President Trump's crime bill passed in January and lauded by famed rapper and Trump supporter Kanye West.

Biden also spoke at length about the innocence of his son Hunter, who was paid $50,000 a month by a corrupt Ukrainian energy company, saying his son had done nothing wrong and the story was all a part of a large right-wing conspiracy.

But he failed to explain why Hunter Biden would be paid that much money when he had no experience in energy or Ukrainian affairs while his father was vice president and in charge of aid to Ukraine.

The 76-year-old Biden closed to thunderous cheers from the 100 or so supporters when he said, "We can't just beat Trump. We have to beat him like a drum."

And the beat goes on.