'What we give out is poison,' said drug kingpin who dealt fentanyl mostly in N.H. 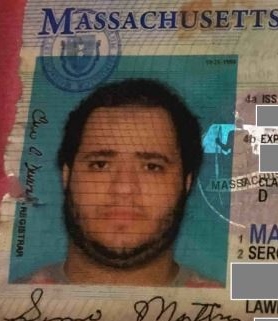 The charges were based upon Sergio Martinez' role in operating a fentanyl trafficking organization, according to U.S. Attorney Scott W. Murray.

The plea agreement, if accepted by the judge at sentencing, would require Martinez to serve a 45-year prison sentence and forfeit $2,000,000 in cash, as well as three houses in Lawrence. The guilty plea came on the sixth day of a jury trial. During the trial, which began on Oct. 1, the government presented evidence that Martinez operated a fentanyl trafficking operation that employed numerous individuals to sell fentanyl to customers from various New England states, including New Hampshire. Testimony at trial showed that customers knew the Martinez organization by the name "Brian" and that most of the organization's customers came from New Hampshire.

Distributors knew to identify customers on the streets of Lawrence by their New Hampshire license plates. Testimony at trial showed that the organization served three distinct sets of customers.

The first group of customers, who ordered the smallest amounts of drugs, was served by various telephones ("small phones") that were located in a specific residence and answered by dispatchers. This residence was referred to as "the base" and dispatchers staffed "the base" from 9 a.m. to 11 p.m. daily. Dispatchers took orders and directed customers to meet various distributors throughout the Merrimack Valley area, mostly in Lawrence or Haverhill, Mass. but sometimes in Salem. These phones usually received hundreds of calls daily from customers placing fentanyl orders. Street-level distributors were provided with 200-gram bags of fentanyl, which they sold for $30 per gram, generating $6,000 per bag of fentanyl sold.

Distributors testified at trial that they sometimes had lines of 10 to 15 customers, most with New Hampshire license plates, waiting for them on the street.

A second set of customers was serviced by the so-called "big phone." The big phone was reserved for customers who typically purchased from ten grams to 200 grams of fentanyl at a time, quantities which the purchasers would then distribute themselves. The defendant and his brother Raulin Martinez answered this telephone, took orders, and sent these customers to meet a different set of distributors. They promised these customers better and faster service than they received if they called the small phones. These phones received between approximately 50 and 100 calls daily.

A third, much smaller set of customers, who ordered particularly large quantities of fentanyl (usually one kilogram or more at a time) called the defendant directly to place orders. The organization would deliver directly to these individuals by sending a distributor, often in a taxi, to deliver to these customers at or near their residences.

Trial testimony showed that Martinez managed numerous individuals including between five and ten runners working each day, people who staffed "the base" answering telephones, and people who mixed and packaged the drugs in milling operations he operated at different locations in Lawrence.

The jury was provided with evidence showing that investigators seized over 12 kilograms of fentanyl from the Martinez organization during the investigation. During one telephone call intercepted over a court-authorized wiretap and played at trial, Martinez spoke to a man who identified himself as a fentanyl supplier located in Sinaloa, Mexico. Martinez told him, "what I look for is quality for when I prepare it and give it to people. Because I'm one of those people that's moving a lot here. I move between 15, to 30, to 35 kilos a month."

In other intercepted telephone calls played at trial, Martinez acknowledged the dangerous nature of the drug he distributed, noting that "what we give out is poison." Evidence at trial showed that Martinez received substantial income from his business and that he sent some of this money to the Dominican Republic. Drug runners testified that they provided the defendant with between $30,000 and $35,000 per day based on aggregate drug sales. On one occasion, the defendant was stopped by the police while transporting $400,494 in cash that he intended to send to the Dominican Republic. This money was seized by the DEA.

The plea agreement includes a forfeiture of $2,000,000 including funds in two bank accounts in the Dominican Republic in Martinez's name. Martinez is scheduled to be sentenced on Jan. 28.

A total of 34 individuals were charged with participating in this conspiracy. Martinez is the last of various co-conspirators to plead guilty.